Only 3 years ago, the idea that three apps from Africa would beat 47 other global app winners, and become finalists in an international industry award show, would have been likely impossible.

Next Monday, on February 27th, 2012 a little piece of history will be in the making at the 6th Annual Mobile Premier Awards in Barcelona. After knocking out the competition in their respective countries during the AppCircus World Tour in 2011; Ghanaian App Developer Robert Lamptey of Saya, Ugandan app developer Christine Ampaire
of Mafuta Go!, and South African app developer Anne Shongwe of Moraba, were each selected to head to Barcelona amongst 20 other top global apps. They will be the first African app developers to pitch live at the MPA Awards. 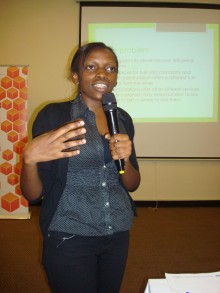 In front of a seasoned tech audience, and an impressive line up of mobile industry Jury heavy weights, Christine Ampaire (pictured right) and Anne Shongwe are making gender history, as very few female app developers – anywhere – make it this far in a global app competition.

South African based app entrepreneur and mother of three, Anne Shongwe created the Moraba app game, which tackles the subject of gender violence in South Africa’s youth population. “I believe mobile technology can also be used for social change” she says. “Developing the game on the J2ME platform was the most powerful way to reach young people, as this is the platform they can afford most, although now more are moving into Android.”

Moraba has 10,000 users to date; Anne says her motivation to move into app development was a personal one. “I watched my 10 year old son and his friends playing many games. Young people in South Africa play up to 8 hours a day on their mobile phones, and that content comes from outside Africa, so for young Africans I didn’t see any games that dealt with issues they deal with locally,” she adds.

The on-going turbulent petrol crisis in Kampala, Uganda, led a group of University students (pictured below) to create Mafuta Go, an app which informs its user of the cheapest petrol within the nearest petrol station. App developer Christine Ampaire explains, “Our application was a product of a 48 hour hackathon called Garage 48. We are a group of students who are passionate about our country and the city we live in, and we wanted to address the daily struggle of rising petrol prices in our city.”

She adds, “In my country app technology is just at the baby stages, which provides more opportunity for both developers and start-up entrepreneur. I’m really proud to be the only female app developer in my group and I get a lot of support from an organisation called Women In Technology Uganda (WITU) which I belong to. Mafuta is the first of many apps we wish to create and its just the beginning for us.”

The third finalist attending the Mobile Premier Awards next week will be Ghanaian app developer Robert Lamptey, a recent Computer Science graduate from Cape Coast University in Ghana. His app Saya has been tagged as the Whats App alternative for Africa. “As young adults growing up in Accra, our primary mode of communication was text messaging and in Africa that’s expensive,” he explains. “So we built an elegant solution that takes advantages of decreasing data charges and leverages Java technology. Now texting will cost nothing with our app.” Saya will launch on J2ME, Blackberry and Android in February and iOS in March. “I love mobile and I love Africa, these two things fuel my motivation for developing software solutions that affect daily life here,” he says.

Where African apps developers may have an advantage, is in their knowledge, experience and response to the needs of their local community. Africa comprises a vast continent of 54 diverse countries on 30 million square kilometres with 1.0 billion people – so this is by no means a generalized realisation of such vast differences, however. Over the past 10 years, the number of mobile connections in Africa has grown an average of 30% per year and is forecast to reach 735 million people by the end of 2012, according to GSMA.

This year’s Mobile Premier Awards Juror, and former 2010 MPA winner of Waze, Di-Ann Eisnor says, “I’m impressed and excited by how many apps were submitted from Africa this year and eager to see more development. Waze currently has 65,000 drivers many of whom are actively working to map their towns, cities, villages and countries on the African continent right now.”

African apps and the new generation of young entrepreneurs behind them, recognize the financial potential of their own market place, and the power that apps have to reach and transform Africa’s social, cultural and economic ecosystem. However, there is still a business and marketing skills gap for many developers; once they’ve built their app and put it on the app store, what happens next? 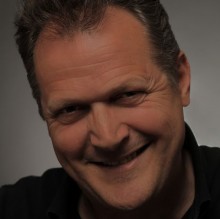 Mobile Strategist and AppCircus co-founder Rudy De Waele (pictured right) comments: “Many of the African app developers we met during the AppCircus Africa tour last year were university graduates, but the vast majority have learnt to code via the Internet. They have great entrepreneurial spirit and drive but lack the business training and mentors needed to take their apps to the next level.” He adds, “We have an AppCircus Academy series planned for Africa later this year delivered at universities for both students and developers.”

Over the next 36 months many things will shift and change in our world. I predict we will see far more female app developers and entrepreneurs recognized, as well as increase month after month of female app consumers world-wide. We will also see a shift in power and commerce as one ingenious app after another disrupts an out-dated corporate business model. And our perception of Africa as an ‘emerging’ continent in app technology shall grow exponentially, tapping into its own vast internal market and simply just emerge.