This isn’t the first time we’ve talked about WallaBee, a fun geo-aware digital collectibles game for the iPhone (iTunes link) that was made by the Ben Dodson Apps team, but there’s a very good reason for doing it again.

After ‘4 months of slaving’, the app has received a massive update and is live on the App Store as of today.

The latest version of @WallaBeeApp is now available on the App Store – itunes.apple.com/gb/app/wallabe… – this is a HUGE update! 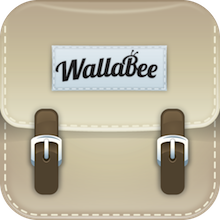 WallaBee, which was recently chosen as the best European startup game at the Nonick 2012 conference in Bilbao, out of 100 candidates, is basically a location-based virtual item collection game.

The aim of the game is to complete sets by collecting – or buying – digital icons, which are uniquely numbered and can be found at well over 2 million locations all over the world.

Some can be found by foraging, some unlocked only by ‘mixing’ multiple items, and some can only be bought in the WallaBee store, using virtual currency called Honeycombs.

After this update, you can now also obtain items branded by WallaBee partners, which may even come with real world prizes attached – we were told they’re very hard to find, though, so take that into account.

Also new are social features like commenting and private messaging, and the developers have now made it possible for WallaBee users to trade and buy/sell items through a marketplace.

You can check out what else is new in the new version of the iPhone game by going over the bullet points in this blog post, but here’s a multimedia taste: