This article was published on February 26, 2015

Organizing friends to go out to the movies or dinner can be a pain; you jump between apps and websites as you try to figure out which restaurant to eat at, which movie to see, at what theatre, all the while trying to organize it over texts.

Vurb, a new iOS app, aims to simplify the way you search by contextualizing results and orienting them around cards, which can be easily shared with others. In essence, Vurb wants to kill those lists of links you’re used to seeing in traditional search engines and stop you jumping between apps to get simple tasks done.

Instead of showing results like a list of links, Vurb presents them as summarized ‘cards.’ Each card has an overview of the most important information for an item (like ratings, location, trailers, etc). As you’re searching for cards in Vurb, you can create ‘decks’ of items to save for later or share with friends.

Right now, Vurb comes into its own when you’re searching for things. It supports Places, Movies, TV, Music, Videos and Events search. Imagine you’re organizing an outing with friends in San Francisco to see a movie. Naturally, the first thing to pick is what movie you want to watch.

When you select Vurb’s movies page, it recommends films to you that are now playing or coming soon, but you’re also able to search. Say we want to see Focus, the new Will Smith movie. Search for it and Vurb will surface a card with the movie’s trailer, rating, where it’s being screened and more. You’re not sure your friends will like it, so you decide to save it to a deck to share with them.

To give your friends options, you add a few movies to that deck and share the lot via email so they can see what’s on offer. Vurb’s cards work much better for this, rather than just sending a wall of links for people to view.

Once everyone’s decided on a movie and a theater, you can tap on the Nearby Places option inside the theater card and view recommendations of interesting eateries nearby. If there’s nothing good nearby, you could instead search for a type of food, the area or a name of restaurant and you’ll get fast recommendations. 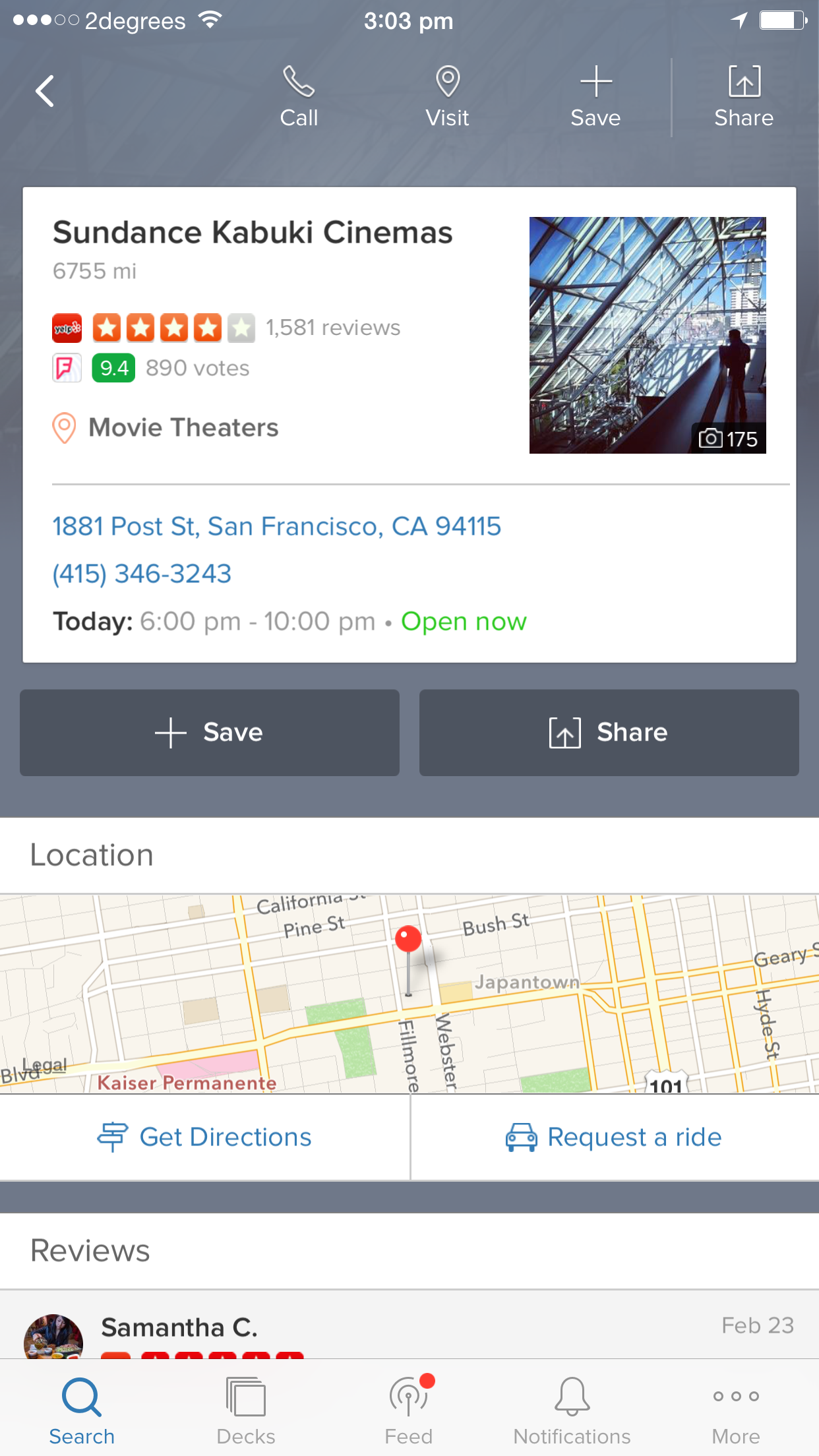 The things you can search for are endless, but the point is simple: Vurb wants to stop you jumping between multiple apps and the mobile Web to get things done.

Each card in Vurb is a combination of information from different sources. The company partners with others like Yelp, Foursquare and Metacritic so it can be shown in a single place. If you want a deeper dive into the results, a quick tap on the info or the company’s logo will reveal more details inside that provider’s app.

In this regard, Vurb isn’t just helping you find results, but it’s also helping other apps surface their information and experiences.

What I found interesting about this approach is that it’s almost the opposite of what’s happening in Asia right now.

Messaging apps like LINE or WeChat are building in almost every service imaginable — you can order a taxi, find a place to go and listen to music without leaving the app — whereas Vurb simply wants to surface the information you need to do all of these things.

For example, a single place card shows you a map of the location and reviews from Yelp and Foursquare, and lets you order a cab via your preferred ride-sharing service like Uber or Lyft.

Vurb founder and CEO Bobby Lo thinks this will be a better approach for the American market, because there are already so many large companies taking such a huge chunk of the pie that working together will be better than trying to build a single kingdom.

There’s lots of benefits to this, he says, because it offers the opportunity for newer companies to surface their brand and apps in search results, without having to run expensive advertising campaigns to get users.

Lo’s biggest frustration with mobile is that while we have all these great apps and have the technology like deep linking to stitch them together; “Mobile apps live in silos and seldom offer people ways to integrate or share information with each other.”

He believes that Vurb is the solution because it “removes the barrier” by connecting the apps together, ultimately reducing the number of times you need to jump between them.

With $10 million in the bank and a number of big partnerships under its belt, Vurb might be the first one that can build a truly centralized mobile search experience. Others have tried in the past and yet siloed app searches still reign supreme.

Vurb is launching today, for iOS users in the US, Canada and United Kingdom. An Android app will come later, along with expanded search categories and countries.