Vox.io, a Slovenian startup working on an amazing browser-based video and voice calling solution, has just made its product way more useful.

The company has been testing a new – and in our opinion much-needed – instant messaging feature simply called ‘Vox.io chat’ with a limited set of users in recent weeks, and is today rolling out the functionality for all users.

Vox.io chat, because it works on the browser, is different from the instant messaging functionality e.g. Skype users are familiar with, in the sense that it support in-line media (compare it to the way Gmail displays YouTube videos inside emails, or how Twitter’s Web app handles shared Instagram pictures for examples).

You can find a screenshot of the new feature in action hereunder: 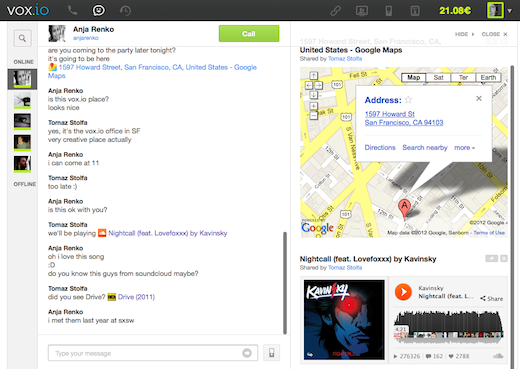 Displaying media in a sidebar ensures that Vox.io users don’t actually have to click links and leave the app to consume content shared by their friends. And by working with Embed.ly, Vox.io chat supports over 200 services out of the gate, including Flickr, YouTube, Instagram, Foursquare, Google Maps, SoundCloud and more.

Some of the things you can ’embed’ in-line during instant message sessions are custom-built by Vox.io, including – evidently – links to Vox.io user profiles.

When another user is not available, people can still transmit as many messages as they want, or send an SMS straight from the chat interface. Chats are stored in the cloud, enabling people to revisit conversations with embedded content included at any time.

And, interestingly, the chat feature integrates neatly with Vox.io voice and video calls, enabling users to send people pictures, maps, videos, slideshows and whatnot during a conversation.

Meanwhile, the Vox.io team is hard at work for the next, also much-needed improvement: a mobile version with support for text-based communication.

Vox.io is backed by Seedcamp and angel investors.