The Macintosh is 30 years old today. Over the next few days, we’ll be taking a look at the past and future of the Mac platform, starting off with a visual history of how the computer has evolved over the past few decades.

For an in-depth look at how the first Macintosh came to be, you can also check out original team member Andy Hertzfeld’s invaluable Folklore.org site.

The first Mac cost $2,495, or $5,594 when adjusted for inflation. It made use of Motorola’s 68000 processor with 128KB of RAM. The included 9-inch display had a resolution of 512×342 pixels. The computer was noteworthy for its first commercial application of a graphical user interface, mouse input, and the inclusion of a 3.5-inch floppy drive.

Prior to the unveiling of the Macintosh project at Apple’s annual shareholder meeting on January 24, the company teased the device in a now-iconic Super Bowl ad riffing on George Orwell’s “1984.” While the spot has been hailed as one of the greatest pieces of advertising, a second ad, “Lemmings,” was reviled the following year.

The shareholders meeting literally set the stage for Steve Jobs to show off his signature flair for drama. While later unveilings, like the first iMac, iPod, iPhone and iPad, would also capture the world’s attention, it was the Mac that started it all.

Next: Macintosh Plus | Read on one page

Following a minor update to the original Macintosh, Apple released the Macintosh Plus, which added a SCSI port and more memory. The computer earned the distinction of becoming the longest-produced Mac for Apple by filling the low-end spot in the product lineup after the Macintosh SE and II arrived.

Next: Macintosh SE | Read on one page

The $3,700 Macintosh SE added hard drive and expansion slots and changed to a new connector for the mouse and the keyboard. It was also the first Mac to include a cooling fan.

Next: Macintosh II | Read on one page

The Macintosh II cost a hefty $6,500, representing a move away from individual consumers and more toward businesses. The machine had a modular case and strong expandability, and unlike the original Mac models, it split the case and monitor into separate pieces.

Next: Mac Portable | Read on one page

Apple didn’t get its first portable right, but the company was correct in predicting that many consumers would eventually shift to laptops as their main computers. The Mac Portable cost a steep $6,500, and included a 16MHz processor and a sealed lead acid battery with a long charge.

Macintosh team veteran Andy Hertzfeld described the Mac Portable as his least favorite Mac because it was “incredibly expensive and incredibly heavy.”

Next: Mac Classic | Read on one page

Apple went back to its roots in 1990 with the Mac Classic. The model finally hit the sub-$1,000 price point that the original Macintosh team had been aiming for. Of course, the low price came at a trade-off, leaving the Mac Classic under-powered for its time.

The 1990s were a dark time for Apple, as the company struggled with poor management and fierce competition. The Quadra represents just one of many Mac desktop lines that the company tried to throw against the wall. This particular model had the dubious distinction of being able to switch between vertical tower and landscape desktop modes.

Credit: All About Apple

Learning from its failure with the Mac Portable, Apple created the PowerBook 100. You’ll recognize it as a proto version of the Mac laptops that have become nearly ubiquitous today. The PowerBook line was a bright spot for the company, bringing in more than $1 billion in revenue in its first year and eventually winning recognition as one of the greatest computers of its era.

Next: Macintosh TV | Read on one page

At this point in Apple’s history, Mac models start to become a blur, but the Macintosh TV definitely stands out. Sadly, it wasn’t very good. In retrospect, it does feel quite ahead of its time, though. Some of we current Mac users have taken to using our computers as our main device for watching content, with some even going so far as to cancel their cable subscriptions and switch to all digital.

Next: Power Macintosh | Read on one page

There’s not much noteworthy about the first Power Macintosh, but the device family would live on for over a decade. Bland desktops like this one represent the struggling state Apple was in as it tried to rediscover its roots.

Credit: All About Apple

Next: 20th Anniversary Macintosh | Read on one page

The $7,499 limited-edition 20th Anniversary Mac pretty much represents Apple hitting rock bottom before Jobs’s return. Oddly enough, it was designed by Jony Ive, the Apple designer that would go on to achieve rock star-level recognition under Jobs.

It certainly was a new product type, just not a good one. Andy Hertzfeld told us that he hated the computer when it came out.

“It didn’t have a philosophy that was utilitarian, it was phony futuristic … It cared about looking futuristic and different more than being functional.”

The original iMac is the second-most important Macintosh that Apple released. Jobs needed a hit to prove that Apple was still in the game, and this was it.

Apple used the iMac to launch the company fully into the Internet age and established the “i” branding that would carry through to its iPod, iPhone and iPad lines. 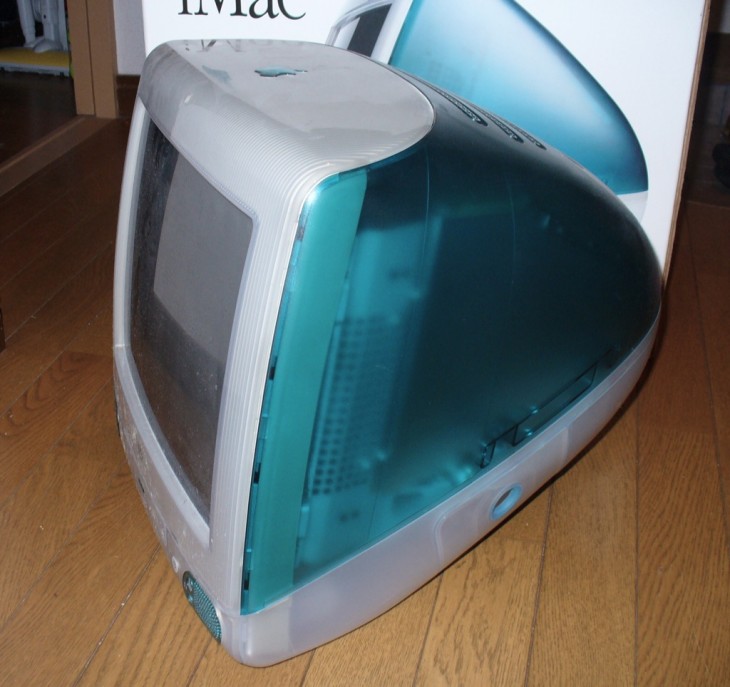 Apple’s decision to adopt the USB standard was highly criticized at the time, but it turned out to have an enormous impact on the industry. The bright “Bondi Blue” color signaled Apple’s return to playfulness and different design, setting it apart from the nearly indistinguishable commodity beige boxes that had flooded the market.

Jobs took the visual style of the first iMac and spread it throughout Apple’s product lineup. The Power Macintosh G3 also introduced an interesting swinging door design that provided easy access to the logic board.

The clamshell iBook felt like Apple’s first modern laptop. It marked the Mac’s transition to the world of wireless networking and, thus, true portability.

After making a splash with the bright colors of the iMac, Apple dialed back its design language with machines like the graphite PowerMac G4. Even 14+ years later, the G4’s style, lines and colors are close to fitting in with today’s Macs.

While the PowerMac Cube is one of Jobs’s most recognizable product failures, many still look back fondly on the Cube as a work of art. The machine was over-priced, suffered from production flaws, and was prone to overheating.

A number of Mac owners I’ve spoken with have put forth the Titanium PowerBook as their favorite ever. While Apple has achieved a more consistent look with its aluminum MacBook Pro and Air lines, the “TiBook,” as it was affectionately referred to, was a workhorse. This was the pinnacle of the pre-Intel era.

Perhaps it’s because the iMac G4 reminds me of Luxo Jr., Pixar’s first short film, but this is another one of my favorite Macs. The design was short-lived, but it had surprisingly strong adoption among small businesses.

Apple first switched to aluminum with the release of its 12-inch and 17-inch PowerBooks in 2003. The 12-inch version managed to feel both compact and powerful, while the 17-inch was enormous nearly to the point of ridicule. Still, you instantly felt more productive and creative whenever you pulled the 17-inch PowerBook out of its custom-made bag and awkwardly perched it on your under-sized coffee shop table. At least, that’s how we remember it.

The PowerMac G5 was hot. Literally. While it was hailed as one of the fastest computers on the market when it arrived, all that performance required loads of cooling. We didn’t know it at the time, but this was the pinnacle of the PowerPC platform.

The overall form of the iMac G5 has lasted for nearly a decade. With its tiny footprint, it looked more like a display than a computer. This was the fulfillment of Apple’s vision for an all-in-one computer.

Apple made up for its failure with the Cube by producing the Mac mini. Its price was newsworthy on its own, as it represented the first time that the Mac had reached truly affordable levels. The device came with quite a few compromises, but it was a great entry point for switchers who already had the required accessories and had held off on trying out Macs because of the premium pricing.

For Apple fans, the transition to Intel felt a bit like making a deal with the devil, but the shift turned out to be remarkably smooth. Apple had been running OS X on Intel on the side for years, even as it built up frustration with the issues the PowerPC architecture was having.

This iMac Core Duo came at a crucial moment for the long-term survival of the Mac and it managed to pass the test.

Apple followed its success with the iMac by switching its MacBook Pro to Intel. With the exception of a few modifications, the company has stuck with this design for its pro-line of laptops.

Black Macs were back in style with the arrival of the MacBook. Sure, you’d have to pay a couple hundred extra dollars for the privilege, but that didn’t stop many of you from falling for that beautiful matte finish. As for the white MacBook model, countless term papers have been written on those machines, thanks in part to Apple’s free iPod back-to-school deals.

Power users had the most to lose in the transition to Intel, and Apple took its time building the Intel-equipped Mac Pro. The machine kept the aggressive look of the PowerMac G5 and included much of its expandability.

The first MacBook Air was overpriced for what it offered, but future improvements and cost cuts have made it a success. In fact, features that started out on the Air have since made their way back to the MacBook Pro. The wedge-shaped laptop may have had a small start, but it has grown to become many users’ favorite Mac. Now it even has an iPad named after it.

Apple’s new unibody chassis managed to make milling sexy for a time. Using a single block of aluminum made MacBooks both thinner, stronger and lighter, while giving Jony Ive a world of opportunities to say the word “aluminium.”

With the new MacBook with Retina Display, Apple turned its attention to improving the screen. Adding all those pixels turned out to be a costly affair, but the price has since come down. The current crop of Retina MacBook Pros offer the performance of a professional-grade notebook while including some of the best elements of the MacBook Air.

After years of the same iMac design, Apple changed things up with a new tapered look and a hybrid Fusion drive that combines SSD with a traditional hard drive. When compared against the original Macintosh, it’s amazing to see how much Apple has managed to shrink down the computer, improving performance and drive down prices  over the years.

The new Mac Pro represents one of the most significant evolutions to a Mac product in recent years. Apple ditched the grating and aluminum look that it had kept for a decade and shrunk the computer into a compact cylinder. The company has also come full circle by once again assembling Macs in the US.

Apple barely managed to make its deadline of the end of 2013, and orders are backed up until March, but the Mac Pro offers an early look at what Apple has planned for the next decade of Macs. Who knows, maybe we’ll see a return of the black MacBook?

Keep an eye on our

Related: What to expect from Apple in 2014: A new product category and the beginnings of convergence