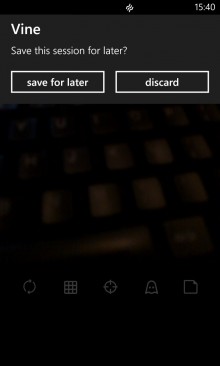 The social video clip sharing service Vine has updated its Windows Phone app to add the ability to save a recording part way through, making it easier to create those perfect Vines.

Released quietly today, the new feature is available only when you’re partway through recording a video. Simply tap the X at the top-left of the screen and a message will pop up asking if you want to save your masterpiece for later. If you’ve finished recording and tap the X it will simply ask you if you want to delete your video. To get back to a saved draft, just tap the icon that looks like a sheet of paper when in recording mode.

However, while it’s good news for Windows Phone owners, iOS and Android users have been able to do this since October. Additionally, Vine on those platforms also supports editing of videos, which is still not present on the Windows Phone version.