Today, view later service Pocket gets a beautiful Mac app to compliment its apps for Android, iOS and the web. It offers a capable translation of the Pocket paradigm from its other incarnations to the Mac design language without giving up its own unique flavor. I’ve been enjoying it quite a bit.

It’s funny to think that just a couple of years ago the best way to read an article later was to save it as a bookmark and look it up on the web. Now, we’re inundated with an embarrassment of riches with services like Pocket, Instapaper and Readability.

Whatever your design preference or content predilection, there’s a decent choice for you. I’m personally a fan of Instapaper for text, and Pocket for video and the bookmarking tools sit side-by-side in my browser’s toolbar. But sometimes I like to close my browser on my Mac and read in a focused way and that’s where the experience of these services falls a bit short.

A while back I wrote up a Mac client for services like Instapaper and Pocket (then Read It Later) called — appropriately — Read Later. I liked the app, but there were some quirks to its operation that made me eventually stop using it and wish for a Mac version of my favorite services. Well, it turns out that Read Later’s creator partnered up with Pocket, which retooled as its own personal Mac app (without Instapaper support, obviously). The old Read Later is still available, but if you’re looking for an alternative for Instapaper, check out Words App.

The new Pocket for Mac is a gorgeous and pleasantly executed viewer for your pocketed items, and it’s free.

The app doesn’t have any ultra flashy interface elements, which is great as it’s all about presenting you your content and not much else. The main view is dominated by a persistent sidebar which cannot be hidden. This lists your saved articles, videos and images with a vertical thumbnail that scales based on the length of the item’s title. The sources are parsed and a source URL is given below each title.

The app has two navigation options with a home/favorite/archive pulldown and a filter that allows you to choose from Articles, Videos, Images or all of the above.

These two pull-down menus are about it for sections and navigation, which is great. If your app is about content, get out of the way of the content. It’s a restraint that many developers find it hard to exercise, but thankfully that does not include the folks behind Pocket.

I’m a huge fan of the single button shortcuts as well. Some of the major actions are still of the command+button varietals, but many of the common actions that you can use to burn through your library are single keystrokes. If you’re going to be archiving, favoriting and moving forward and back through your saved items dozens of times a session, why make it any harder than one key? This is brilliant, and I wish more apps did this.

There are two font choices, one Serify and one Proxima Nova. You can increase or decrease the size and switch from justified to ragged-right layout for rendered articles. I’d prefer hyphens here, rather than stretched spacing, because it’s more pleasant and easier to read. But hyphenation algorithms are relatively difficult to implement, so perhaps they just haven’t gotten around to it. None of the mobile apps have hyphenation currently and this version of Pocket uses the same engine to display text, which is why it’s not here. I’d like to see it in the future though.

A button at the top of the viewer window allows access to the original web version of the content. 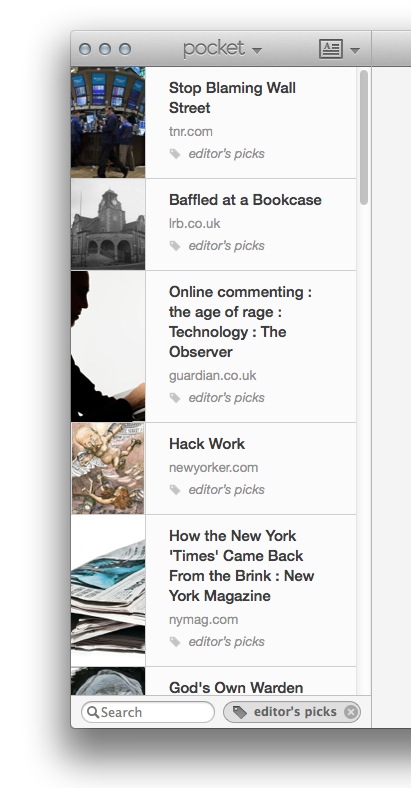 The sidebar URL parsing arrangement works best for articles and videos, and not so great for images, which typically have a URL as a source and title. This leads to a bit more rough-looking entries for images and the titles cannot be altered. This makes tagging, which Pocket does support, almost essential if you want to refer to a particular image later.

If you save an image-bearing page, it’s presented inline with any text, but Pocket intelligently sees whether it’s the primary content of the page and files it away as an image. If you save an image directly, they’re presented aligned left and top, which makes the viewing experience a tad lopsided. It would be nice to see these matted in the window if space allowed, but it’s not a huge deal as this is only for directly saved images. A future version should address this, however.

In the end, text and video are the most-saved items for Pocket users, and those experiences are suitably refined.

Video content is especially nice, with a bare minimum station identifier of the source, a date if available and the video (nicely centered). Each video has a play icon overlaid on the thumbnail, and I’m not so sure they need to be as big as they are to get the point across that they’re playable, as they obscurer the content of short-titled content a bit. But otherwise, it grabs video and plays it back like a champ. If you save content from a Flash-video site and there is an alternate format of the video player available, perhaps one built with HTML5, it will use that in the saved item for you. If only flash is available, then you’ll need Flash running on your computer to watch it as there is no Flash player packed with Pocket currently.

Aside from a few non-crucial quirks, the Mac edition of Pocket has shaped up very nicely in its first iteration. The branding of the apps for mobile platforms and the web carries over nicely here, and the interface elements give off a Mac native vibe in keeping with Mountain Lion’s newly matte interface elements. Once you get into a groove the single key shortcuts, speed of import and browsing make it a great way to buzz through multimedia content that you might not have gotten to the first time around.

I’ve always likened ‘view later’ services like Pocket to a psychic tap that you can use to ease the pressure of feeling like you’re going to miss something. A great article or lengthy video that you just don’t have time to look at, but isn’t permanent enough to bookmark fits nicely into your ‘Pocket’ and now there’s a great Mac app to soak up your tapped content.