Today’s update comes almost three months after Viber boosted its Skype-rivaling credentials by rolling out video-calling apps for Windows and Mac. To coincide with that launch,Viber also included a major update (3.0) to both its Android and iOS apps, with the former featuring a completely redesigned ‘Holo’ interface, among other Android-specific optimizations. 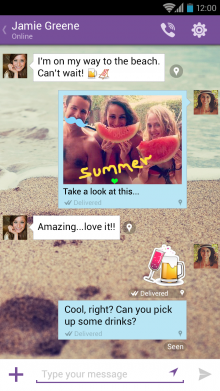 Now, with version 3.1 for Android, Viber’s getting playful by letting users create more personalized messages, while planting false mustaches on photos of their friends.

“Viber is a feature-rich platform that gives our users multiple ways to communicate freely,” explains Talmon Marco, CEO of Viber.

“We are constantly working to expand and enhance that functionality to give users complete freedom over the way they communicate,” he continues. “We think the new doodle feature will not only prove to be incredibly fun for Viber users, but will also make Viber that much more useful as a communications tool.”

The new version for Android also lets users see when a message have been viewed by the recipient, as well as a number of other performance-related updates.

With 200 million users, Viber has emerged as a major contender in the mobile VoIP communications space – and with its recently introduced desktop versions too, this will only strengthen its foothold. As for doodles, well, this feature will no doubt prove popular among some users.

If drawing-themed messaging apps are your thing, you’ll maybe want to check out Cubie too, an Android and iOS app that takes message-doodling to the next level.

Meanwhile, Viber 3.1 for Android is available to download now from Google Play, and the iOS incarnation will receive the same love in the coming weeks.