Vamos‘ first event discovery app is now available in the App Store, the young Berlin-based startup announced today. In practical terms, it helps you find the interesting local events and where your friends are going in real-time.

At the moment, Vamos is pulling this info from Facebook, by letting you know which public and private events your contacts have shared on the social network.

While it will obviously compete with this giant, the startup doesn’t seem too worried about it; according to its co-founder Luis-Daniel Alegria, “Facebook is only the first layer.” Once it gains traction, the team could partner directly with event organizers – and its core focus on events could make the difference against Facebook.

According to Alegria, it all started last year in a kebab shop in Amsterdam while he was in town with his now co-founder David Prentell. The pair was looking for a party to attend, but didn’t know where to start, which gave them the idea to create an app that would solve this problem.

Yet, it took a few months before they began to work on it. The opportunity came in the form of a hackathon in Berlin, where they formed a team with their friends Erik Collinder and Jens Dressler and started developing Vamos. 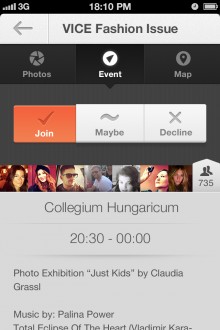 While the concept may not sound groundbreaking at first, there’s something about Vamos that sets it apart from the crowd, starting from its attention to detail. The app is very well designed – not only nice-looking, but also very easy to navigate, with a social layer at all stages. Here’s a short intro video:

One of the most interesting things about Vamos is how much it has relied on user feedback from scratch – so much so that it considers its 140 beta testers to be almost part of the company, which is called Vamos & Friends UG as a tribute to its supporters. 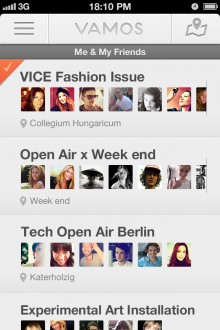 It’s worth noting that the app already works anywhere in the world, though the network effect means that it gets better if your friends are on board. In other words, the main priority for Vamos is now to get the traction it needs to optimize user experience – its ambitious goal is to reach 1 million users within 12 months.

As for its business model, it hopes to become a key partner for event organizers by driving foot traffic to their venue. Tech Open Air (TOA) Berlin next week will serve as a test, as Vamos will be officially launching during this busy two-day event.

➤ Vamos, via the App Store