In the week that Tumblr has been acquired by Yahoo, it’s interesting to see that Urturn, a service with a similar focus on user-generated content being shared by a youthful audience, has announced a $13.4 million Series A funding round. The round was led by Balderton Capital and coincides with the launch of Urturn’s mobile app for iOS.

Until January this year, Urturn went by the name of Webdoc and it initially developed an audience by allowing users to share multimedia collages encompassing images, videos, text and audio. The rebranding as Urturn saw the Switzerland-based startup focus on templates that added some direction to users as to what they could create. The templates also make sense when it comes to marketing partnerships, allowing users to create, say, their own personalised version of a musician’s album cover as a form of viral, meme-based promotion.

Indeed, music is one area that Urturn, and Webdoc before it has done well in. Acts such as One Direction, 50 Cent, Ellie Goulding and Alicia Keys have run campaigns in the past and recent sign-ups have included Snoop Lion and Will.i.am.

The iOS app, to be complemented by an Android version soon, is essentially a compact, portable version of the Urturn web app, complete with the tools needed to create and share template-based creations on the go. Quite why I decided to create an image called ‘I believe in the power of Rupert the Bear’, I don’t know but a few people ‘liked’ it, so I’m happy enough. 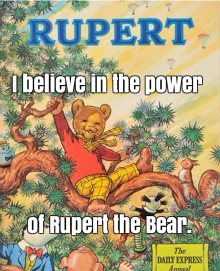 The Tumblr-esque nature of Urturn is particularly apparent when you start following people. Instantly, your feed screen fills with user-generated, meme-style creations that you can ‘like’ and ‘reshare’.

Interestingly, Urturn says that it isn’t charging for the marketing campaigns run on its platform at the moment. “We’re not charging for the promotional campaigns just as Twitter and Facebook are not charging for tweets or posts,” says co-founder and CEO, Stelio Tzonis. “Today, musicians don’t get promoted or do any monetzation on Urturn. But it has been really encouraging to get such a positive response from the music industry and we’re excited to see how other industries such as fashion will use it to engage with the user community.”

The funding will be used to continue to grow the business and develop the product. Balderton contributed 10.7 million, while the remaining $2.7 million comes from the private equity arm of Debiopharm Group.