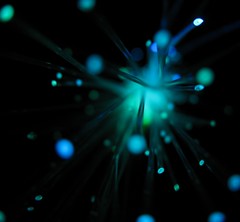 The UK only manages to scrape 13th place in a report which assesses broadband internet take-up across 30 surveyed countries.

As for the actual speed of broadband services available, the report (published by the OECD – the Organisation for Economic Co-operation & Development) shows the UK trailing behind several European neighbours, including Sweden, France and Denmark, putting it in 21st place overall!

The reason why the UK has better broadband penetration than speed of service is down to the fact that most UK subscribers continue to do so via DSL (Digital Subscriber Line) rather than by super-fast fibre networks.

Fibre is the reason why nations such as Japan and Korea are way out in front, boasting speeds of up to 1Gbps!

So whilst broadband take-up in the UK is reasonably strong, it’s definition of ‘super-fast’, the standard the government has targetted to reach for 90% of subscribers in 8 years time, is still slower than the speeds reached today in countries such as Spain and the USA.

Government investment in broadband access has become a political hot-potato with some nations, including Finland and Spain, viewing high speed Internet access as a basic human right, whilst others question the value of the huge investments required during a period of global economic instability.

The OECD report insists, however, that sufficient direct benefits could be driven from electricity, health, transport and education sectors alone.