Ubertesters, a platform for testing mobile apps across a range of different operating systems, has added support for the Jira and Mantis bug reporting systems, and is currently testing out PhoneGap integration, among other new features.

Since Apple acquired the company behind Testflight earlier in the year and removed support for testing Android apps, we’ve seen an increase in the number of end-to-end app testing platforms looking to step into the void. 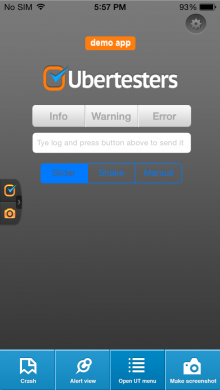 To this end, Ubertesters has announced that it now integrates the Jira and Mantis bug reporting systems for better issue reporting, and that it is currently testing out PhoneGap integration with a select few customers in private beta, which would allow for easier app creation for users. A full launch of the PhoneGap framework is expected in the first week of May, the company told TNW.

From today, the SDK for iOS and Android devices will also support offline testing, which had previously not been possible.

Rounding off the list of changes is a new ‘shake’ feature that allows testers to report an issue by shaking the device, rather than using the slider that had previously appeared on screen; some users had complained that the slider blocked aspects of the apps being tested. Once the shake feature has been enabled in settings, the slider will no longer appear.