Back in December we reported that private-car booking service Uber was set to expand into 25 new cities over the next 14 months. And today it has announced that Vancouver is the next city it will target.

Currently, the San Francisco-based startup is operational in most of the major US cities, with Paris its only launchpad outside of North America so far. But with a London roll-out expected by the time of the Olympics this summer, and Asia by the end of the year, we’ll likely start to see a slew of new additions to its roster in the coming months.

Indeed, Canada is Uber’s latest port of call, launching officially in Toronto in March, and now its “secret testing” has kicked off in Vancouver, just a few days after it began its first tentative steps in California’s San Diego, with renowned skateboarder Tony Hawk.

Uber held a so-called ‘Happy Hour’ event a few weeks ago in the Western Canada metropolis, and it since bagged itself a couple of well-known local names for its inaugural journeys. 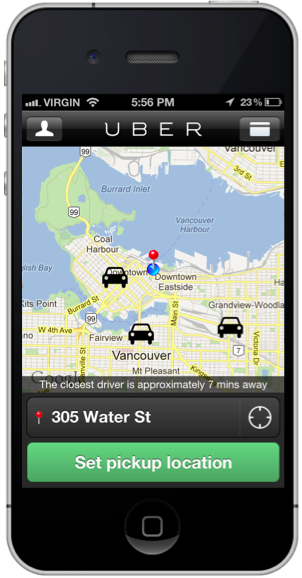 Real Housewives of Vancouver star Reiko MacKenzie nabbed the “Rider Zero” honour, and minutes later HootSuite founder and CEO Ryan Holmes, entourage in tow, snuck in as Rider One. “No slouch when it comes to technology, Ryan was laser quick to notice our Secret Ubers pop up in the app,” writes Uber in its announcement today.

So Uber is still in stealth mode really, and while there are some cars on Vancouver’s roads, the startup is quick to remind users that it may not be quite up to scratch yet. “We’re still in the process of building our supply and hitting the perfect price point, so feedback is welcome,” it says.