Jonathan Barouch is the CEO and Founder of location-based analytics application Local Measure.

I had an unusual experience this morning at my local cafe. While sipping my latte, I overheard an elderly couple at the next table discussing Twitter’s market cap and what Twitter’s future revenue opportunities are. Twenty-four months earlier, that very same couple may not have even known what Twitter was, let alone how they intend to make money.

Herein lies Dick Costolo’s (Twitter’s current CEO, in case you were wondering) new reality. Twitter is public and Dick is the face of a very high profile global tech company. Every man and their dog will start to offer their opinions on Twitter’s strategy.

I, too, have a few ideas on where Twitter should focus some of its energies… and that place is local.

While Twitter has experimented with location-based features in the past, we haven’t seen many new features to support location in the last 12 months. On a recent trip to Singapore, I noticed my tweets from the Twitter app were being incorrectly geo-tagged to the neighbouring country of Malaysia. This highlighted to me that to date Twitter hasn’t had much of a focus on location.

In the future though, this is most certainly going to change. Location adds a rich layer of content and data to Twitter which it can’t ignore. Here are a few areas where location can impact Twitter:

Have you ever witnessed someone setting up their first Twitter handle? Twitter is a whole ‘nother language. You’ve likely watched them fumble through the application for the first time, unsure of who to follow, how to get tweets and what the ‘@’ and ‘#’ symbols represent.

The critical period for a new user on Twitter is the first few weeks after they sign on. If they start to see value from the platform in that time then they’ll stick it out and learn the Twitter lingo which current users take for granted.

Location can play a huge role in making a user’s initial experience a little less daunting. From suggesting some prominent accounts in your local area to follow to surfacing interesting tweets from close by, Twitter has the power to personalize your first experience and capture your attention from the outset.

Imagine flicking over to the stream for the first time and seeing tweets about a fair down the road, or tweets about a new shop that opened up in your neighbourhood. In this instant, a new user would suddenly understand the power of the real time data and why all the fuss for this 140 character platform.

Most importantly though, Twitter has the opportunity to be the go-to application for local. No other platform has the volume of publicly available data about what’s going on around you than Twitter.

Imagine if Twitter allowed its users to not only share their geo coordinates (as they do now) but also tag tweets to the specific place they are at. Suddenly, you would have the world’s cleanest and richest source of location data. If Twitter follows Vine’s lead and uses Foursquare Place data to do this, they would have the added advantage of being able to cluster all of the location based posts that feed into it from third party apps such as Instagram and even Foursquare. 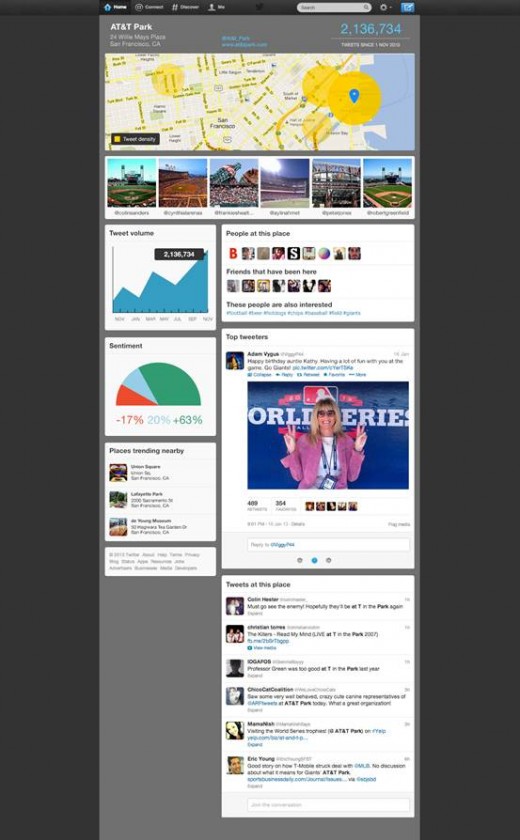 It isn’t hard to imagine how these local tweets could then be fed back into Twitter’s apps to create a view that is centered on locations or events. While Twitter users often use hashtags for large events, having an efficient geo-tagging system would allow tweets to be clustered for a location or event irrespective of whether the correct (or consistent) hashtag is being used. The collective view of a shop, mall, sports stadium, beach etc. would be like Foursquare on steroids.

Imagine the types of content Twitter could bring together on a place page during the Singapore Grand Prix. How many people are tweeting from the location? How many of them have been to the track before? Who are the most interesting people to follow at this place (and which restaurants do they typically go to?) and maybe even surface the top stories.

Sure, you can already attempt to find local tweets according to your location – but those often require an additional app or extra taps on the screen. Users can lose interest with every superfluous button.

With Twitter users more actively sharing their location, users would give even more explicit signals about where they are going and what they are interested in. This type of data and the possibility of local targeting would be interesting not only to large businesses with multiple local outlets but also local SMBs.

For local business, there aren’t yet targeting options on Twitter’s advertising platform that allow SMBs to connect with their actual customers. With more granular location features, an SMB could potentially self-serve on the Twitter ad platform and elect to target users who have visited their location (or potentially even their rival’s location).

This type of advertising has in-built ROI as the business would also then be able to see if the clients who have been targeted have subsequently tweeted from their business location (potentially closing the loop from Twitter to real world transactions). Local advertising on Twitter would have the potential to truly disrupt Yelp or even Google’s local advertising revenues.

Do you have other ideas on how Twitter can improve its local features? Share your thoughts in the comments.