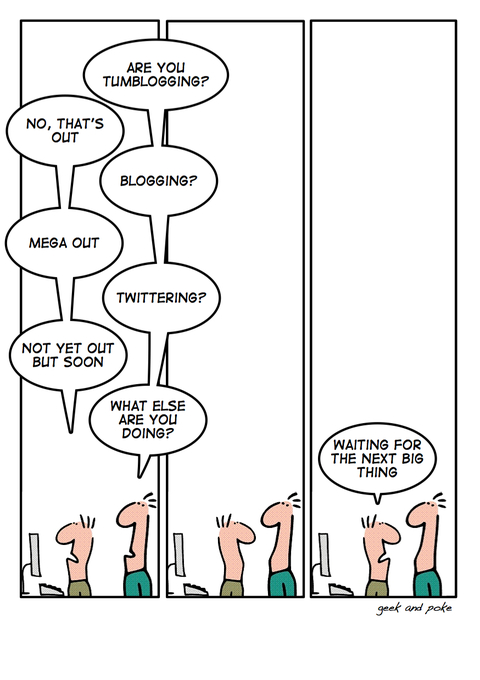 A question in my life has just been resolved, thanks to free wifi at the Portland airport, and Foursquare. Finally, at long last, I have figured it out.

Why do the giants of technology get such a better pulse on what is bubbling next under the hood than everyone else? I used to think that it was sheer brilliance, but now I know better.

Right now, it’s Twitter that gives them the inside track. I do not mean that they find people talking about what is next on Twitter itself, we can all do that. Search.Twitter is the great equalizer; they have a much different advantage.

Think to when you joined Glue, or perhaps Foursquare, and you were given the option of finding the people that you follow on Twitter to follow on that service. It gives you an instant go-button for the new service, to get you started and jazzed.

It works well enough, perhaps creating a bit more noise than is desirable (especially on location-heavy products), but it is a smart move for the small team and the new service. Users seem to like it as well.

So then, as you can see, the technology elite with their endless Twitter followers can track how many people are joining onto which service, and in what quantity, just by signing up, linking their Twitter account, and waiting. They get an almost real time influx of data to the Gmail inboxes that explains where people are heading to at that moment.

If you had that data, how hard would it have been to decry Foursquare as the next big thing back before it became a norm?

If people begin to follow them on the new service, they know that it is growing. People are joining, pushing the pull Twitter friends button, and finding them. The more followers you have on Twitter, the more data that you have. Scoble has 100,000 technology fans following him on Twitter; imagine the data that he gets.

This happened to me, in a small way, with Foursquare and Gowalla. I use both sporadically, mostly to track when I change cities, or states, meaning that I have limited check-ins on both. The funny thing was the number of friend requests I was getting on both. I was getting too many. For the longest time I had something akin to 4 times as many followers on Foursquare than checkins.

Trust me, no place I go to is that interesting.

But what I have outlined is the cause, in my nearly three years on Twitter I have built a following that I am proud of, and when those people begin to Foursquare, I get some love.

All this does is reinforce to me how much I love Twitter. It seems that Twitter and Facebook are becoming the two great suns in our social galaxy. Facebook for people you know, and Twitter for the people that you want to know.

I have two social new years resolutions: unfriend 600 people on Facebook, and get to a million Twitter followers. Guess which one is going to happen?

Final note, I just dropped a Chinese Lantern at Concourse C at PDX. If you pick it up and tell me, I’ll take you to lunch in Chicago.