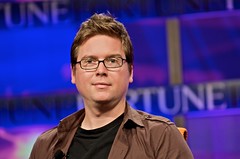 Twitter co-founder Biz Stone has been on quite a press tour of late, giving us bloggers and journos plenty to talk about.

In his latest stop off, Tel-Aviv, the entrepreneur has confirmed more acquisitions are in the pipeline for 2010.

“That is something we are definitely interested in…We made an acquisition last year that turned out to be an outstandingly good decision.”

“As our attention is grabbed by some of these developers, we will take a hard look at them,” Stone said.

Twitter’s only acquisition as yet was Summize in 2008, now simply known as Twitter Search.

Stone also addressed Twitter’s ambitions to make 2010 a drive towards profitability, potentially through “non-traditional advertising”, something we’ve delved into here.

“2010 is really going to be the revenue year,” he said. “I don’t know if we’re going to be profitable, but we have plenty of time”

“We are making some money today, but it’s just the beginning,” Stone said.

Current revenue comes from companies paying to use Twitter’s data, these include partnerships with Google and Microsoft.

On Monday, Stone said he definitely doesn’t want to sell the company but may pursue an initial public offering or an alternative.”The point is, we want to build our own company that will last for a long time. If an IPO’s the way to do that, then sure. We don’t have it checked off on the calendar yet.”