Last week, cloud telephony platform Twilio held its third-annual developer conference in San Francisco. And while there were certainly a few announcements made, there was one item that stood out. Among all of CEO Jeff Lawson’s points during his keynote speech, much of it was focused on the aspect of being a “do’er” and how there’s a movement within companies towards something he calls software-defined communications.

Before we begin, let’s describe what Twilio does: it’s a communications platform that enables apps and programs to utilize voice, text, and photo messaging and is managed in the cloud.

Building your own software-as-a-service

What is software-defined communication (SDC)? It’s the process whereby developers are empowered to be in control of the communication scheme, not the hardware manufacturers. Just like with open source programs on a computer, you could have Windows or Linux — one will will be more flexible for your needs while the other is suited for a utilitarian paradigm.

As part of SDC, Lawson spoke about how communication innovation isn’t happening through traditional stakeholders, but actually through software developers who are tired of the status quo and want to leverage the cloud to make telephony technology work to fit their workflow, not some other company’s vision.

During his first three-hour keynote session, Lawson noted how innovation has been handled in the telecommunication industry in the past, including the use of legacy servers on-premise. And as the world moved more into the cloud, so did telecommunication companies, but apparently weren’t executing a true implementation. Lawson suggested that some companies are simply utilizing a faux cloud implementation: putting their servers in a virtual environment and “putting a cloud over it”.

In a manner of speaking, you could say that Lawson’s trying to “rage against the machine” — those legacy hardware and software systems that companies have in place, on-premise, and have become expensive to maintain and lack the capability to scale to the organization’s needs. He’s also against the traditional boxed software and services that companies are purchasing and instead feels that communication capabilities shouldn’t be defined by the hardware, but the software in them. 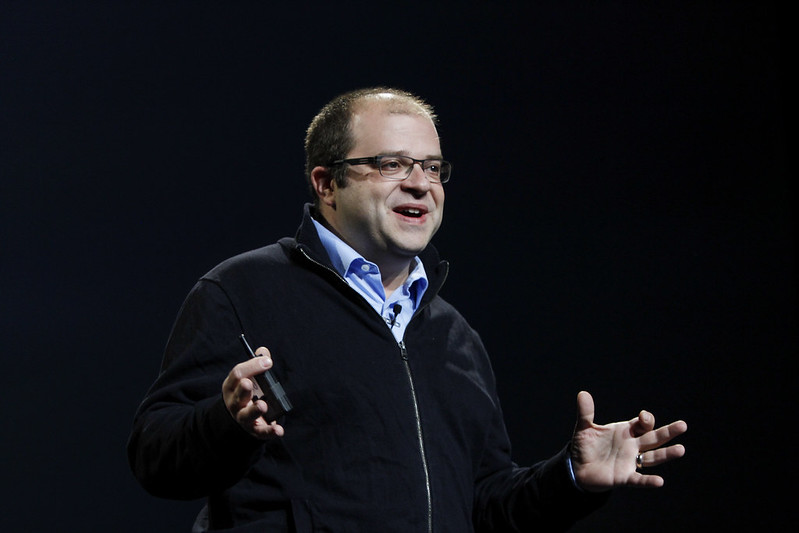 What Lawson is saying matters to you, our reader, because Twilio wants to convey that it’s trying to empower developers to operate with fewer constraints. With legacy systems, finding ways to customize communications to the needs of your organization can be tricky, especially when you want to build apps that incorporate photo messaging, text, and voice calls.

Lawson is advocating that with software-defined communication, the control rests with the developer whereby they can utilize features that they see fit, whether it’s from Parse, StackMob, or even Twilio. Perhaps it’s best to think about it like Legos — Twilio provides the pieces and it’s up to the developers to create something. Traditional systems are more pre-made designs that you would have to spend time dismantling and rebuilding to what you want.

Making his case for disruption and public offerings

Hearing Lawson speak, it’s almost as if he’s making a case not just to developers in the room (the “do’ers”), but to potential investors as Twilio flirts with a potential IPO. It’s still unknown when Twilio will pull the trigger and file its S-1 with the US Securities and Exchange Commission, but Lawson was on stage to talk about how he thinks a whole industry should be changed.

Disruption is not something new for Twilio — in its five years, the company has racked up an impressive list of company customers, an army of developers, and an impressive number of applications built on top of its platform. But it’s also not the only game in town — it’s competing against the likes of Tropo, 2600hz, Aculab Cloud, Nexmo, Rebtel, Voxeo, and others, not to mention industry incumbents like AT&T, which launched a developer API at the beginning of this year.

Among Twilio’s stated claims to fame is its reach: Lawson says that its platform-powered applications have made over 1.5 billion calls this year, a 65 percent increase from last year. Furthermore, these applications are now being used by more than 350 million people, or 20 percent of the digital households in the world. Twilio Client, the company’s service that allows Voice over Internet Protocol (VoIP) calls to be made on any device, has also seen the number of unique endpoints increase this year from 104 million in 2012 to 340 million.

Twilio is looking to show not only developers, but investors and the enterprise that it’s not just rolling out features for feature-sake, but it’s looking to enhance a whole industry and further show-off its viability.

Perhaps the steps to move beyond developers took place last year when the company announced that it was expanding its service, bringing it to a total of more than 40 countries, across 6 continents. The addition of a Global Low Latency (GLL) network and improvements in call quality certainly bolster Twilio’s mission to become the new-age telecommunications company. But it’s not interested in becoming the next AT&T, Comcast, Verizon, or KDDI — in fact, it has signed a strategic partnership with the Japanese-based telecom giant to provide a communications API for local developers to build on top of.

But aside from its global expansion, simply targeting developers isn’t going to be enough. As most businesses may know, the real money is with the enterprise. So Twilio needs to find ways to show companies that they can build their own call centers and communications infrastructure and not find themselves in the same situation where they’re stuck with legacy systems when they want to move websites and applications into the cloud. That’s probably why earlier this year, Twilio unveiled its SIP protocol, putting it in direct competition with services like Spoken, Anveo, Callcentric, SIP2SIP, Nextiva, Voiceflex, and others.

At the beginning of Lawson’s keynote, he said that there’s an easter egg that appears in all of Twilio’s communications: “We can’t wait to see what you build.” He believes that companies and developers are looking for platforms and services that let them customize services that work specifically for them. To borrow an old motto from Burger King: “Your way right away.”

But yes, Lawson’s speech about software isn’t new to the industry — it’s exactly what Salesforce’s Marc Benioff has been touting for many years as he sought to move enterprise computing away from local machines and servers and into the cloud where it can be accessed 24 hours a day from anywhere in the world. Twilio appears to want to take that same approach, but instead of business tools, it’s going after communication.

The question then becomes whether more mainstream companies will buy into the technology and what Twilio is selling. Is there still fear prevalent within an organization that they need someone else to be a developer or can they do it themselves? What about all the money that they’ve invested into the existing communication architecture and infrastructure?

Only time will tell, but until then, there’s no doubt that Lawson and his team of evangelists will continue to rage against the machine.