Google has just announced that it is now using live and historic traffic data to calculate just how long a trip will take. While this isn’t the first we’ve heard of traffic updates or of Google’s interest in implementing this feature, it looks like the feature will now be available in select areas around the globe.

By calculating the length of time your trip may take before it begins, users can now select the fastest method of travel. In Google’s own example of traveling to JFK Airport from Manhattan, we can see it’s quicker to take the train versus a taxi during rush hour.

The Google Lat Long blog notes that not all roads yet show current traffic information. Szabolcs Payrits, Google Maps Software Engineer, notes: “don’t despair. You can help your fellow drivers and improve traffic data about road conditions and speeds by turning on the My Location feature on Google Maps for Android. To learn more about directions and navigation on your Android phone, start here.” 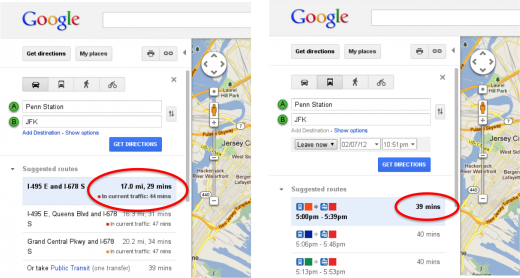 The fact that Google is tapping Android’s My Location feature reveals a lot on how this data is being gathered, allowing the search giant to build up a collection of data over time that will allow it to predict traffic patterns.

This isn’t the first we heard of Google’s crowd sourcing plans. The initiative has been known since 2009, but still feels a little erie.

Overall, the new feature certainly looks promising, as the shortest route isn’t always the quickest. Also, the feature is implemented so subtly under the standard time prediction that it’s not going to draw too much attention to itself.