The Tour de France has been steaming across France for ten days now, keeping cyclists fans in awe. It’s a modern classic so far, with new heroes, surprising sprint winners, and EPO scandals. It also seems to be the definite break through year for new technologies surrounding the cyclists race. Your blogger earlier reported about the Tour de France edition of Google Streetview and across the web, several bicycle-related initiatives have emerged – like the Ubilabs live tracker. 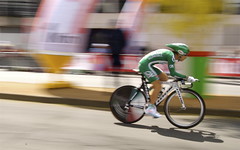 But in the end, it’s all about watching the race. Since most of the Tour de France takes place during working hours, Internet television is the medium to tune in to. And that’s what people do; on a rather massive scale. American sports events channel Versus.com has attracted 20.8 million viewers so far, according to Nielsen Media Research data. More than 4.3 million videos have been downloaded, says Versus, which is more than the total number of last year. The network is averaging 341,000 videos per day, compared to 170,000 per day last year.