As far back as early last year, Apple had been rumored to be working on deep iOS integration with social network Facebook. Evidence of this had popped up in internal builds of iOS, with Facebook appearing in the system level Settings menu.

This rumored partnership never materialized and instead Apple revealed earlier this year that it had worked to thread rival service Twitter into iOS 5 to an extensive degree. With this partnership, Twitter effectively signed an immortality clause and became the first outside service to become an integral part of Apple’s OS since the exclusive deal that we have heard Apple cut for Google’s map data before the release of the iPhone.

This integration of Twitter comes in many forms, but the basic underpinning is single sign-on . This is a feature that allows users with a Twitter account to sign in to that account at Settings>Twitter on their iOS devices. They are also presented at this point with an opportunity to download the official Twitter app for iOS, if it is not already installed.

You can add multiple accounts here and all of these accounts will be added to any compatible Twitter client when you load it up. Currently the official Twitter app and Tweetbot both support this. 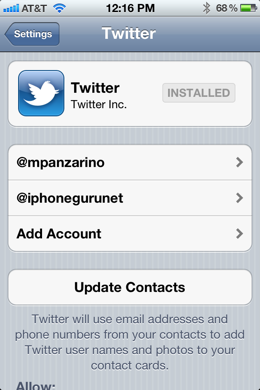 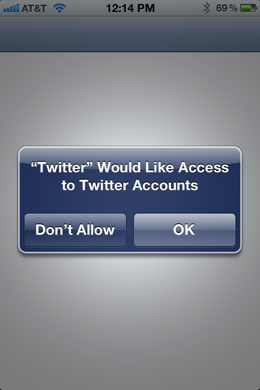 Once a user has signed on to Twitter they can update their existing contacts with the profile image of people on Twitter. This is similar to a feature that currently exists in the Facebook app for iPhone, but is done from the system menu, rather than from inside an app.

The single sign-on feature also has other benefits. Once developers of apps that have Twitter integration begin using this hook, you will be able to automatically log on to any Twitter app. This means that once you have signed in to Twitter at the system level, you can jump right into any Twitter app or client without having to log back on to Twitter.

This does not apply to any applications that use Twitter through Safari though, so you will still have to log on to Twitter.com manually for instance. But it should lower the barrier one step further for anyone with Twitter integration on iOS that wants people to interact with their app.

The ramifications of this for developers are that if you want a user to be able to download an app that is a gateway to a service, like Flickr or Instagram for instance, and begin using it immediately, you can simply add Twitter integration and the user can immediately use it once installed, with now time consuming account signup.

Once you have signed in to Twitter at the OS level, you can also now Tweet right from many Apple apps that come installed on your iOS device.

You can Tweet a location in Maps, a picture from the camera roll, a link from Safari or a video from YouTube. 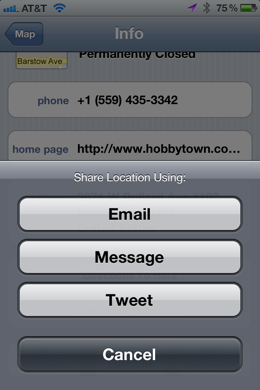 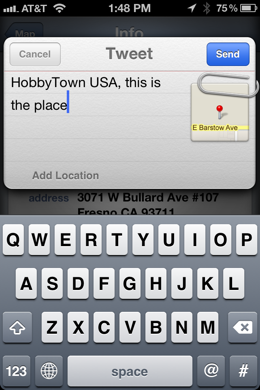 When in an app that supports this, you will see a ‘Tweet’ option once you hit the Share button that you would normally use to email or copy an item. Once you select Tweet, you’ll be presented with a ‘Tweet sheet’ that lets you type your message to go along with the automatically attached item. You’ll notice a character counter here as well as a specially customized keyboard with a shorter spacebar and a dedicated ‘@’ symbol.

In general, this Tweet feature has worked brilliantly for me. There is an option to tap-to-include a current location, although that was a bit annoying as there is a system-level toggle in the Twitter section of the Settings app that is supposed to enable this but it never seemed to work outside of the Maps tweets. I assume this is a bug at this point. Nevertheless, simply tapping the ‘Add Location’ button pops your location right in there.

There is also a nice auto complete that fills in Twitter usernames once you begin typing with the @ button, although this was a crapshoot. It seemed to work well with any hugely popular Twitter accounts, but was not consistent across accounts, even ones that I had added specifically to contacts.

Scoring this prime position as the social partner of Apple’s iOS is a huge win for Twitter and its developer ecosystem. Although Twitter developers have had a lot of issues trusting that Twitter was interested in their survival, most of the ones I have spoken to about this integration seem incredibly happy with the possibilities.

The amount of effort that Apple has put into making Twitter feel like a seamless part of the environment shouldn’t be taken for granted. This was an immense amount of effort both on behalf of Twitter and Apple. This integration appears destined to stay for the long haul and this spells great things for Twitter and for any developers looking to ship products on Apple’s iOS platform using Twitter services.

The potential for growth here is huge and for developers looking to provide a seamless experience to their users, a system-level single sign-on service will look incredibly attractive. I wouldn’t be surprised to see less apps offering Facebook a as primary account integrator and more using Twitter, at least on iOS.

The benefit of this for a user is largely dependent on whether you use one service or the other, but I think that this will be an interesting trend to watch as iOS 5 gets out there and developers cast their votes by using it.

Regardless of the developer benefits though, the ability to Tweet out images, directions, videos and links directly is a cool one and should cut down on a lot of copying and pasting from Apple’s integrated apps.