Ten days ago, we brought you news that Nike had unleashed its latest apps on the public realm – Nike+ Basketball and Nike+ Training.

Whilst the apps were freely available to download from late June, both are designed to work specifically with special footwear equipped with the latest Nike+ tech. Not something you can freely try out without first forking out big bucks for the appropriate sneakers.

With that in mind, The Next Web got a chance to try out the aforementioned footwear in London earlier today. What do the new range of shoes look like?

On show today were the Nike Hyperdunk+, which were first unveiled a couple of weeks back. They’re not cheap though – around $250/£190 is what you can expect to pay for these gems, and that obviously includes the little chips and cables needed to ensure your shoes are synced with your iPhone and/or computer.

The shoes let you know how high, quick and hard you play. It’s easy to see how these can become addictive – even if you lose a game of b-ball, you can retrospectively ‘challenge’ your buddies by analyzing and comparing your vital stats to separate the slackers from the superheroes.

We also got to try out the new Nike+ Training shoes which are geared more towards general workouts than shooting hoops.

We wore the Nike Lunar TR1+ shoes, where we skipped, jumped and sprinted on the spot to try and beat the competition. Thanks to a giant screen that displayed the iPhone data, we could easily see how we were faring against each other.

I had no idea I was such a good skipper, but that’s a story for another day…

You can read more about what the associated apps offer in our previous coverage here. 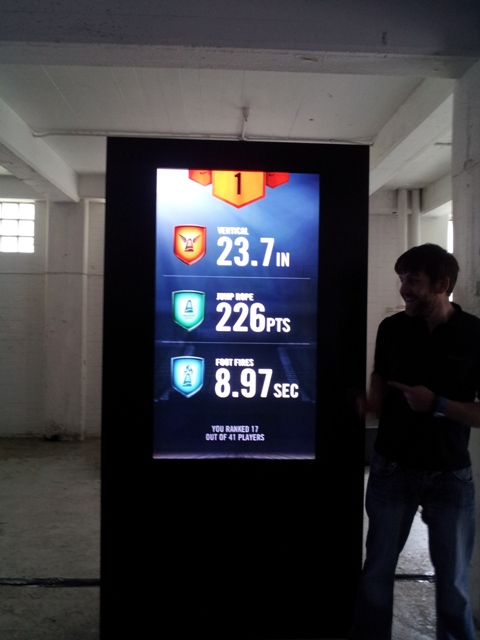 My first impressions of the shoes were, well, they were great. But would I pay $200+ for a pair of smartshoes? Personally, no I wouldn’t. But there are plenty of people that would, and I really can see these taking off in a big way amongst amateur athletes.

With that in mind, it’s worth looking at exactly who these shoes are aimed at.

During a series of presentations in London today, one point became abundantly clear. Nike is continuing in its quest to take its tech from the lab where superstar athletes have typically worked with the sports giant to improve their performance, and embed this tech in the public domain: in shoes sold in the local mall.

Charles Barkley: People must be able to compete with themselves

Former NBA star Charles Barkley took to the stage, alongside track-and-field legend Carl Lewis, to talk about the latest developments in sporting apparel.

More specifically, Barkley took an interesting stance on Nike’s innovations in the tech space, noting that to be the best you can be at any given (sporting) discipline, you have to know how you’re performing before you can improve. In other words, you have to compete against yourself.

So, when Barkely learned about the data-transmitting footwear, what did he think?

“I started with Nike in 1984, and like Carl (Lewis) we had these great big concrete shoes. We thought they were the best. And now you see how far they’ve come with their technology, it’s amazing,” he says.

“The thing that people are going to understand…is that it’s going to be great for normal people,” he says. “To become a professional, or to get to the Olympics, you are training at the highest level. One thing that normal people are not able to do is compete with themselves. The toughest part about getting in condition is that you compete against yourself. Normal people don’t get to see their times, how high they jump, how much energy they are putting out. You can’t compete and make a living if you are not pushing yourself to the next level.”