We first covered Pictarine way back in April 2011, a Web app that pulls in all your photos from various hosts, combining them into an organized, powerful image browser for you to access all your online photos. That’s great in itself, but what’s the real benefit here?

“You can then take photos from all of these different places and create a virtual album (known as a Zest) to share with others,” wrote TNW’s Brad McCarty at the time. “Once shared, people can add their own photos, bringing in a collaborative function like what we’ve seen from Yogile. The obvious difference, of course, is that you don’t have to start with photos on your computer, as Pictarine pulls them from your other services.”

Then last October, the Paris-based company rolled out support for a number of additional services, including the increasingly popular photo-sharing site 500px, online storage services Dropbox, PicPlz and Windows Live.

That’s Pictarine in a nutshell. Now, however, the photo service has transcended its Web app roots and launched a native app for Android mobile devices.

From that point, your ‘Photo Feed’ will display all images shared by your acquaintances on each of the networks you choose to connect with:

You’ll note there is also a ‘Playlists’ feature, which lets you organize your top snaps and share them across the social sphere. This can be a mix of your own photos, or ones shared by your friends. To add a snap to a playlist, you long press a thumbnail and select the playlist you wish to add it to. 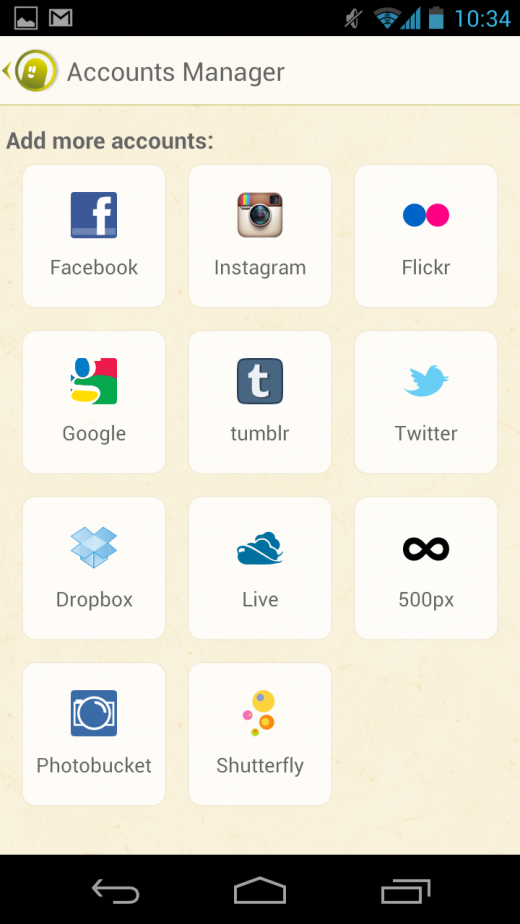 Now, if you’re more into managing your own photos than seeing your friends’, then you have the choice of an additional six services – Google, Dropbox, Windows Live, 500px, Photobucket and Shutterfly, which are accessible through the ‘My photos’ and ‘Surprise Me’ items in the main menu.

When you view your own photos’ stream, you’ll see everything from the accounts you’ve integrated with and your camera roll. You can choose to just view the photos stored on your device, if you wish, or select a specific host (Facebook, Twitter etc) to view your photos from there.

If you’re not overly bothered about which photos you view, the ‘Surprise Me’ option reels in a random mix of your snaps from everywhere.

We were big fans of Pictarine’s initial Web-based incarnation, and now that it has landed on Android via a native app, well, we’re even bigger fans.

The big question, of course, is when can we expect to see this land on Apple’s omnipresent mobile devices?

Well, it’s probably fair to say that one will hit the App Store at some point in the future, but you’re maybe best not holding your breath. Guillaume Martin, CEO of Pictarine, says they have nothing to announce on this front as of yet. “Today we focus on creating an awesome app on Android.”