Echoer was one of the 16 finalists at LeWeb last December, and eventually went on to win the Google People’s Choice Award.

Just to recap the basic premise briefly – Echoer promises to help you share and explore a world of thoughts around you. Huh?

Launching initially on iOS earlier this year, Echoer taps the power of GPS and lets you express a thought on something that’s happening around you (example: “I’d really love to sample some of that new beer”) and watch it gain traction with those nearby. Alternatively, you can click on a marker and see how many echoes are already there – you can choose to ‘amp’ it if you agree with the sentiments. The more ‘amps’ an echo receives, the ‘louder’ it becomes and thus receives more prominence within the app.

First thing’s first – I was surprised to see so many echoes when I first launched the app – even allowing for the fact that this is already available on iOS. The deal is, Echoer taps Foursquare’s API to pull in ‘thoughts’ from its mass of users. This is very necessary – as with any budding social network, without users it lacks content, and with no content it won’t pull in more users. So tapping an existing social network is key here.

When adding an echo, you hit the giant plus button, and you can create a thought, event or discovery. These are color-coded (as with the iOS incarnation of the app), so others can easily see what the echo is roughly about. As you can see here, a live music event shows up – though it is some time away, so perhaps this could benefit from a time filter. 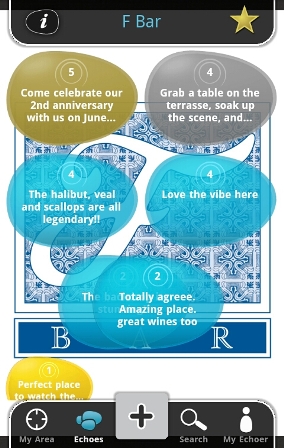 So, Echoer essentially curates users’ thoughts in real-time, and strives to place the best content on the map to surface popular recommendations.

In addition to this, Echoer is also announcing a Content Partner Program, which will feature media and event partners from around the world, including The Montreal Gazette and Montreal Jazz Festival. They will be sharing their content and expertise within Echoer to help users discover interesting events and places, and it’s such partnerships that should hopefully see Echoer gain more traction.

“We designed Echoer to be used by anyone who’s interested in what’s going on around them,” says Daniel Cowen, co-founder and CEO of the Montreal-based startup says. “With the release of Echoer for Android, and our Content Partner Program, we can now take that to the next level with recognised local experts using Echoer as a tool to promote their knowledge and experiences to passers-by.”

Echoer is a really nicely designed app and the way it has gone about building the content is impressive – you can tap opinions about local restaurants, bars, concerts, events and everything in between.

Meanwhile, check out the official Echoer promo video below.