Unbaby.me, unfriend me, the discussion around the pros and cons of posting baby photos online has got a kick in recent weeks thanks to the aforementioned Chrome app that replaces baby pics with “awesome stuff.”

While it is a pained and clichéd discussion (yeah, I’m not at all interested) the chatter does provide an ideal back drop to introduce Tinybeans, an Australia-born private social network that lets parents keep track of their quick-growing brood with pictures.

Actually, calling Tinybeans a social network is a bit of an injustice to the service, which has just finished taking part in the first intake of Australian, Techstars-affiliated PushStart accelerator. It is a lot more than an ‘Instagram for kids pics’ or ‘Facebook for parents’. The service is a digital journal for parents and the rest of the family, as founder Stephen O’Young explained to me.

The project began three years ago when O’Young and his wife celebrated the birth of their third child.

“I’d always wanted to use the Internet and blogs to keep a record of our two kids growing up,” he explains, “but I never got it going. When our third came along, I finally did it. I started a blog and began uploading photos each day.”

O’Young stuck at it — something I personally failed at doing — and his 13-month side project, then no more than a basic website, blossomed into a popular destination for members of his family.

When he heard about PushStart — a 3-month long accelerator run by former TNW-er Kim Heras — Hong Kong-born O’Young decided that his personal project was one with the potential to go further. After recruiting co-founder Sarah-Jane Kurtini, the company was successfully put forward for the program.

Fast forward to today and the team, which is now three after co-founder and CTO David Cheong jumped on board, has an iOS app in the App Store with plans to develop a version for Android.

However, as I quickly found out from using it, the service is totally open and users can sign-up and add photos from the website directly, while a very nifty feature allows Instagram users (on iOS or Android devices) to post photos direct to Tinybeans from the $1 billion Facebook-owned service.

What really appeals about Tinybeans is the layout, it’s really simple to use and also, crucially, browsing is a cinch.

Photos are uploaded into a calendar-like system, allowing them to be found easily, giving visual way to track the countless photos of their offspring.

The site lets parents set reminders which will will ping up to inform you that you’ve not yet uploaded a photo to the site that day. This can be relaxed to occur on a weekly basis but, with the objective being to upload a photo each day, the daily ping works nicely.

O’Young says he is “sightly embarrassed” by the early layout but, for me, that’s the real charm of it. Kids’ names can be added to the service and tagged in photos — Facebook style — but access to the photos is 100 percent controlled by parents. Tinybeans users can grant access to others, such as grandparents, aunties, etc, via an email invite system.

Those VIPs invited to view photos can do so via the Web interface, which makes things simple enough or grandma, granddad…and perhaps even grand-granddad, to take a look. What’s more, they can be given permission to add photos of their own, which can really bring albums to life.

The Instagram upload solution is a really neat way to partially circumvent the lack of an Android app, and it also makes sharing easier (with the added bonus of publicising Tinybeans in the process).

Those wanting to set the sharing up should visit this link, where they’ll be prompted to connect the two services. Photos can be added by tagging #tinybeans in the upload.

This method would appeal to everyone, and those that are cautious of pumping the service with too many baby pics may wish to avoid it, or switch their Instagram account to private, perhaps.

Barely a month out of PushStart, it is still early days for Tinybeans. The service has picked up around 2,000 users with precious little marketing, O’Young says. More encouraging, however, is that it has seen 35,000 photos added.

“We’ve had some great feedback,” O’Young tells me, emphasising that the team is very much in the stage of tweaking and developing the service. “We have users worldwide and (aside from Australia) the UK and Hong Kong are particularly significant locations for us.”

“Tinybeans isn’t a social network, it’s an online photo record you share picture to,” he continues, “and we’re looking to build on that with the introduction of a number of services to provide more features.”

Milestones and landmarks, which help document kids’ developments in a journal-style way — such as first steps, first tooth, first day at school — will be coming soon to the service to give parents the opportunity to mark key steps in children’s progress.

Based on feedback from early users, the team is working to bring a printing feature to the service. While Walgreens in the US recently introduced a series of partnerships to allow in-store prints to be ordered from apps, Tinybeans is addressing a global user base and will introduce a feature to have photos printed and mailed out. 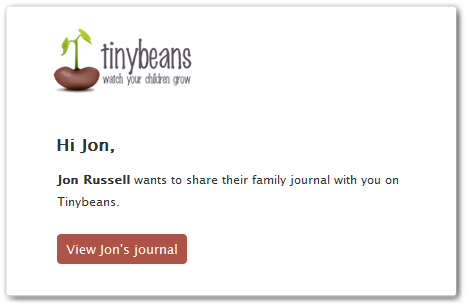 To me, an expat living far from my country of birth, this would be a great introduction, but it goes beyond just sending photos to grannie and grandma.

“We’re looking into Christmas cards, collages and other areas where photos can be used.”

Calendars are a great idea that Tinybeans is pursuing. A 2013 calendar using each day’s pictures from 2012 would likely be popular with many.

The revenue from printing won’t be enough to drive Tinybeans, O’Young admits and other product developments are being considered. For now, though, the company is not focused on developing its revenue streams.

On the subject of money and revenue, the co-founder is quick to point out that the service is free to use, and always will be. Equally, if things do go wrong, Tinybeans will provide its users with their data, no questions asked, he assures me.

While user growth has bee put on the back burner to focus on product development, O’Young says that Asia is a key target for the service as it develops in the future.

“China will be a key target as well as other Asian countries where we see a culture that is interested in child development and, most importantly, photos and social networks.”

Certainly the combination of kids and social networks looks good on paper for  markets like Indonesia — where Twitter and Facebook are booming — and Thailand — which is a noted Instagram hotspot. The tricky part to making it in Asia is hitting the right note to gain viral attention, perhaps via notable celebrities, or establishing an on-the-ground presence, the more costly and time intensive option.

So if, like me, you have kids, are digitally-minded and have failed (perhaps numerous times) to get a scrapbook or journal going, Tinybeans is an option that is certainly worth considering. Especially if you have an iPhone.