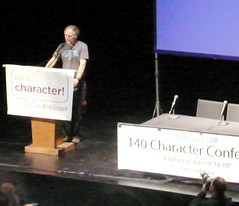 Tim O’Reilly spoke today about how Twitter influenced his live and work. It is always a pleasure to listen to O’Reilly who is not only a publisher and conference producer but also a visionary, industry leader and influencer.

Today O’Reilly told us that news is not just about making money, it is about serving a community. O’Reilly tells us about how he once started publishing books not because he saw a business opportunity but because he wanted to serve and strengthen a community.

Instead of Twittering to get more Followers O’Reilly tweets to making his community stronger. He doesn’t promote his own products because there would be too much to promote. Instead, he promotes other interesting Twitter users and shares links to content on other networks than his own. All to feed the audience, his community, and reap the benefits in the long run, instead of getting some value in the short term.

All of this translates back to O’Reilly unofficial mantra of ‘Creating more value than you capture’ and no other network stimulates this behavior than Twitter.