The 7th annual German Game Developer Awards have recently concluded in Düsseldorf, Germany, and Vienna based Socialspiel’s Tight Lines Fishing has walked away with the Best Social Game 2011 award.

Facing stiff competition from some of Europe’s largest names in gaming, including Wooga’s “Diamond Dash” (recently spotlighted at LeWeb), and Bigpoint’s “Skyrama,” the angel funded startup snagged the hearts and minds of both audience members and Academy of German Game Developers judges with it’s immersive fishing village story.

The game has been live on Facebook for the past 8 weeks, and counts approximately 50,000 Monthly Active Users, and 3,000 daily active users, according to App Data. Tight Lines Fishing’s story centers around players receiving a small plot of land from a now missing uncle, who also happens to be the local fishing legend. With the assistance of the loving family friend Marv, a.k.a the in-game guide, players must try their skill and luck at a wide variety of angling based challenges, resulting in a progressive series of rewards and village customization options. Admittedly, there are some heavy FarmVille overtones, as there appears to be a lot of catch this, share that, ask friends for… But if social challenges, collecting, and gaming together are your bailiwick, Tight Lines Fishing puts a creative twist on the familiar game format.

“The incredibly positive feedback we’ve received from gaming fans and the press has shown that we have touched a nerve with Tight Lines Fishing. By creating highly-immersive, quality experiences on social platforms around the World, we’re showing the World that Vienna’s game development industry is alive and well, in addition to proving stiff competition to some of the largest social games developers around the World.” 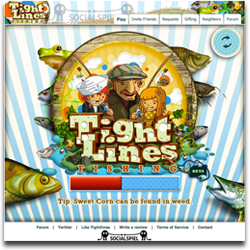 And if you’re wondering exactly where this talent is coming from, you’ll only need to look at Vienna’s video gaming history, as Socialspiel is comprised of team members from both the former Rockstar Games Vienna studio, as well as Deep Silver Games Vienna.

The awards ceremony was held in the historic Altes Kesselhaus in Düsseldorf, and had well over 1,000 video gaming fans in attendance. The German Developer Prize seeks to showcase and the reward the best and most successful video games developed in the German speaking market.