It feels like SOPA and PIPA have received more attention today than an Apple product launch, and rightfully so. It’s been an intense day so far, with protest coming from nearly every major tech company to speak of, including Twitter, Google, Facebook, Reddit, Wikipedia, Microsoft, Flickr, Tumblr and many more.

Hundreds of geeks, founders, designers, programmers and other rational people gathered today in protest against SOPA and PIPA (which we live blogged here). Meetups were planned around the states, and now it simply feels awesome to known that thousands and thousands of “Internet citizens” have banded together over this cause — inside and outside the US.

Because everybody is shouting at the top of their lungs, the entire country is starting to take notice. But even with this in mind, it’s important to remember that nothing has been resolved… yet. If you’re interested in fighting the good fight, keep reading.

Three college students at The University of Pennsylvania hacked together something that empowers anyone with a website or blog. The team hacked together 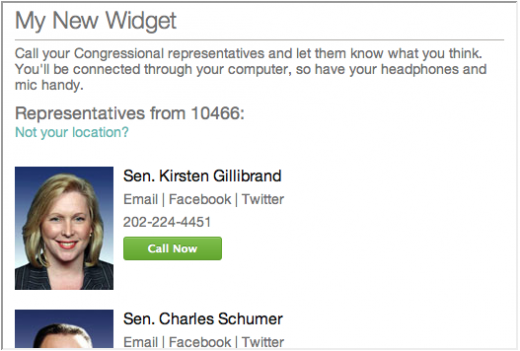 Tess Rinearson, one of the creators of the app told TNW:

We were actually inspired by anti-SOPA websites–most of the bigger ones have a way to reach your congressional representatives right on the website. This is because SOPA is a cause that developers care about: programmers will take the time to roll these widgets for these websites. But most activists aren’t developers–most people don’t have the skills to create a widget like that for their causes. We wanted to help those people out.

We know that for many political causes it’s important to have lots of people call their congressional representatives; that’s why so many websites have a call to action to do just that. But few actually have a call. We wanted to make that happen. Anyone can go to the website and create a widget, which they can customize for their cause. We then make it really easy on website visitors, because we calculate their representatives automatically.

The team’s site is already seeing 10s of thousands of hits and the widget is being installed on major sites like Twitpic. The reality is, the team has done a wonderful job, and the results have the potential to help the US truly flood its representative’s phone lines with a cold, hard reality check.

Head to the site below and hook it up on your blog. At this point, there’s nothing better anyone can do for the movement other than help it grow, and Grassroutes makes it simple, quick and effective.