It feels like ages ago now, but do you remember Facebook’s most recent F8 event? One thing that captured my attention was M Suggestions. This was Facebook’s effort to make messenger more useful by anticipating the user’s desires. So, if you were to message a friend about going for a pizza, it’ll bring up the Seamless app.

It’s super clever stuff. At the time, I couldn’t help but feel sad that the technology was limited to the walled garden of Facebook Messenger, especially when competing chat apps could benefit from it. I use WhatsApp, Telegram, and Messenger almost equally, and I sorely wish the experience was consistent as possible between apps.

Of course, that’s a pipe dream. The chat market is competitive, and Facebook wants to preserve its advantage. But that hasn’t prevented third parties from creating their own compelling alternatives.

AppNext is a giant of Israel’s AdTech scene. Based in Tel Aviv and founded in 2012, the company initially focused on tackling the issue of application discovery. Over the past five years it has grown, and now employs over 130 people across seven international offices.

But now, it’s pivoting with the release of AppNext Actions. This service takes advantage of its AppNext Timeline technology, which was unveiled in February of this year. This allows marketers to introduce context-specific adverts within mobile applications.

AppNext Actions essentially broadens the scope of what this can do, and packages it in a way that’s easy to integrate within an application. Over breakfast, AppNext founder Elad Natanson showed how this could work in practice.

The most basic way is integrated into an smartphone virtual keyboard. These can predict the next word you’ll type. Why can’t they also interpret what you’re writing about?

Wouldn’t it be hugely helpful if, in a conversation about buying my fiancée a gift, the keyboard suggested apps that could help me do that? In a conversation with my boss about grabbing dinner, wouldn’t it be awesome if I could request a taxi to take me to a restaurant, or even order a takeout? 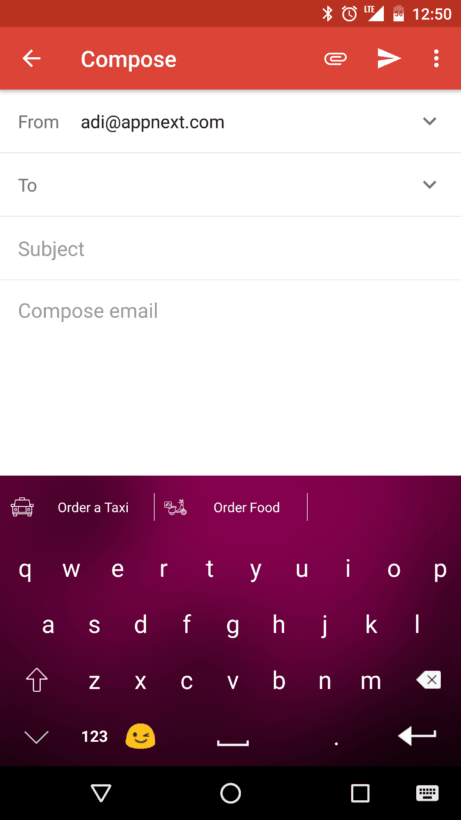 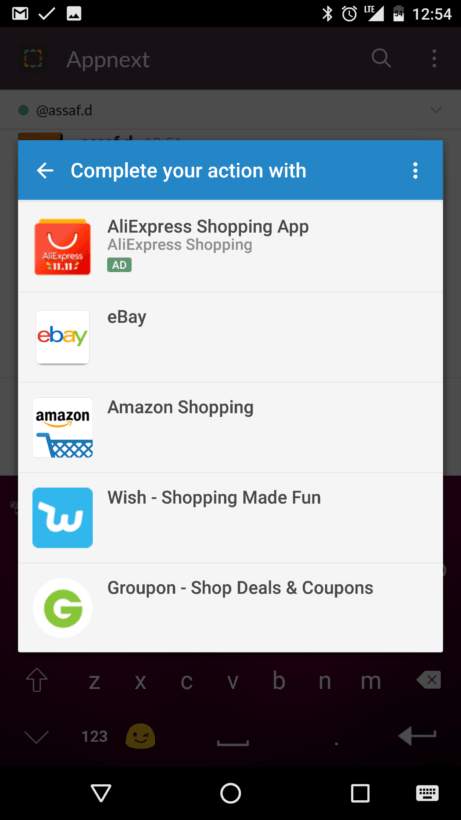 It’s also worth noting that this also works within non-text environments. So, let’s suppose you’re using a map application, like Google Maps or Waze. When you search for directions, AppNext Actions could suggest that you get a taxi instead, and even prompt you to open Uber or Gett.

Actions can also be organized on a dashboard, or even integrated into the lock-screen. So, around lunchtime, you might see an icon to order food appear, as demonstrated in the below GIF.

Adding this is simply a matter of registering with the API, reading the documentation, and taking it from there.

What’s in it for developers?

Long before its launch, AppNext Actions has already seen a flurry of interest, and the company is working with several developers through an invite-only process. According to Natanson, the technology is being integrated into fifteen different applications, all with large, multi-million user audiences. These are in several different verticals, including virtual keyboards, Android launchers, and news applications.

AppNext Actions is also integrated into DailyHunt (formerly NewsHunt), a popular Indian content curation service, with as many as 90 million users. The company is also in discussions with Kika — a virtual keyboard with over 100 million users.

The attraction for developers is obvious. AppNext Actions allows them to monetize their applications, while offering a service to users they might actually want to use.

Here’s how it’ll work. AppNext Actions will suggest the user take a taxi. The user will then tap on that, and see a list of potential taxi providers — like Hailo, Lyft, Gett, or Uber. People tend to select the first or second option offered to them, so these have a value. Brands can ‘bid’ to be number one or two on the list. When a user clicks on a sponsored item, the app developer gets paid — usually a few cents per click.

For brands, this is a pretty low cost of customer acquisition. For developers, they’re getting paid without having to resort to intrusive banner adverts, or in-app purchases that limit functionality. It’s as close as a win-win as you’ll get.