Over the weekend, Y-Combinator graduate Curebit was caught stealing code and designs from the very well-known 37 Signals. Essentially, code was directly lifted and Curebit was called out on it rather aggressively via Twitter.

The Sharebooster site is serving even more images straight off the Highrise server:yfrog.com/oddh4zoj . Fucking scumbags.

Developers are commonly protective of their code, and since Curebit took something and called it its own, it is easy to understand 37 Signals’ backlash. After some delay, the startup officially apologized on its blog here. And as much as I buy the idea that Curebit was in a pinch and lifted some code, the fact that they were also stealing bandwidth makes it seem like they wanted to get caught.

But as much as Curebit was in the wrong, some people have taken a surprisingly different angle from the bigger picture: 67 Signals is a parody of 37 Signals’ own site, complete with a heavy dose of sarcasm. 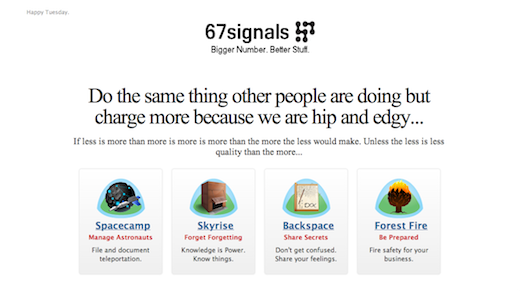 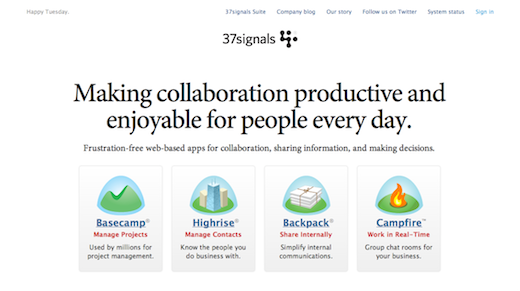 I’m not saying I agree with the parody by any means, but it’s certainly an interesting perspective that criticizes 37 Signals’ creativity and originality. I’d also like to find out who made it, and see why the creators have such a bone to pick with 37.

On that note, I’d love to hear your thoughts on the controversy and the mock-site. Let us know in the comments below!

Update: It looks like the 67 Signals site was pulled. We contacted them via the original email that was on their site, but have not received a response yet. You can view screenshots of the site before it was taken down here.