“There will always be times of network congestion and busy servers. Web pages aren’t getting any smaller, and the more bandwidth [that] is available, the more we use. Delays are not going away.” That’s the logic behind Mark McAndrew‘s lofty goal of a new type of ad network for mobile devices — ads that would appear on a user’s screen while they’re waiting for the next page to load. McAndrew and his brother have filed the necessary patent paperwork, and now they’re simply awaiting approval before they roll out the idea further.

While the idea is simple, the details are considerably more complex. The fact is that you can sum up the idea in just a couple of sentences, but McAndrew tells me that the patent filing weighs in at a whopping 37 pages. A big part of that comes from the different methods by which ads would be displayed. Yep, I’ve seen the PPA. It really is 37 pages of extremely precise definitions from lawyers who know their stuff.

What’s actually happening here is the creation of an ad platform that operates on existing space, without in any way compromising the content being viewed. The ads simply fill the blank portions between page loads. If a user happens to be on a fast connection, they might only see the flash of a logo between pages. Slower loads would allow for more rich-media advertising, or full pages of text. 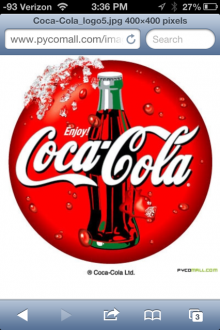 The genius of the idea, at least in my opinion, is that it works no matter how bad your connection might be. To accomplish this, ads are pre-loaded to the device, and could even be limited to load only when on WiFi so that no mobile data is dedicated to their use. McAndrew says that they’re also considering ways in which NFC could be utilized, so that you can get context-sensitive ads based on your location.

Though it’s easy to argue that these are just interstitial ads, the likes of which we’ve seen before, McAndrew is quick to refute that claim:

“In truth, they’re badly named. Interstitials are supposed to be ‘between web pages’ but in reality they’re extra webpages, interrupting the user. Hence why everyone hates them. Our method doesn’t interrupt anything, though. The ads are pre-fetched earlier and only ever displayed when the user is waiting for the next page to download. Doesn’t delay the browsing experience at all.”

The ad content can be linked to a content delivery network (CDN), an external ad network or it could just pull content from the site being browsed. Soon after the first page load, the ads would be loaded in the background so that they are ready to appear when the click to a new page happens. Clicking on an ad would open a new page or tab, so that the existing content isn’t interrupted. On top of making money from the platform itself, McAndrew tells us that there is consideration of running their own CDN, whereby they’d pull a portion of the revenue from the ads that they host on the service.

But perhaps equally as interesting as the product is the answer to the question of why the team would do it. That’s where this story gets doubly interesting. McAndrew is the Founder and CEO at Worldwide Computer Company, doing business as Charity Engine. According to him, the goal with this new advertising model is to bankroll Charity Engine in order to keep it moving forward.

“We’re out of seed fund, Facebook only showed our launch announcement to 1%-2% of our page, and as we don’t have any more marketing budget to grow the grid to self-sufficiency, we have to find another income stream and quick… The joys of running a startup!“

Facing facts, most of us don’t like ads. Taking that a step further, we tend to start disliking advertisers because they (and their hired agencies) want to purchase the most invasive ad that they can find, an action that typically leads to readers being annoyed. But if you are just filling up blank space, perhaps it’s a better option. We’ll definitely be keeping an eye on what McAndrew and his team do in the future.