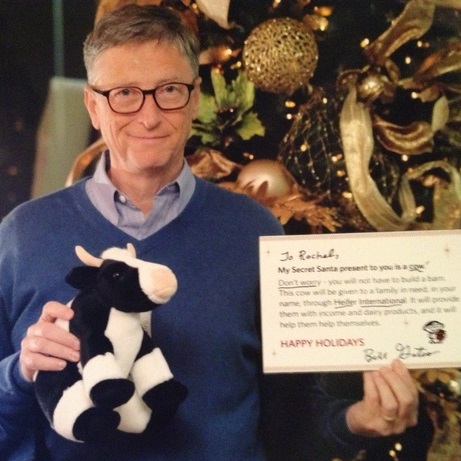 He may be the billionaire founder of Microsoft, champion of numerous charitable causes and much more, but Bill Gates is just like the rest of us… sometimes. Point in case, Gates took part in Reddit’s Secret Santa present exchange, to the delight of the lucky girl on the receiving end of his gifts.

Redditor NY1227 tells all in a post, explaining that she had no reason to figure ‘Bill’ was anything other than a regular guy, until she saw his photo within her gifts and “my jaw hit the EVER LOVING FLOOR.”

Gates’ presents included a stuffed toy, a donation to the Heifer.org charity, travel book ‘Journeys of a Lifetime‘, and a proof pic of him with the gifts. Full details at the link below.

➤ Spoiler alert: Bill Gates did not get you, because he got me. [Reddit]