Postulate One is one part citizen journalism, one part a study in the global definition of what it means to be an entrepreneur, and one part … a 10,000 mile bicycle trip across Eurasia.

Recent American university graduates, Morgan Hartley and Chris Walker have taken on the task of travelling across Europe and Asia by bike, starting the trip in Paris today, and ending it in Shanghai in September 2013.

The pair will be cycling through 19 countries, including Switzerland, Turkey, India, Nepal, Cambodia and Vietnam, with a few flights here to avoid the difficulty of negotiating Iran and the Arabian Sea.

Hartley and Walker will use the 18 month project to find the cream of young thinkers to help with their project. The duo are seeking 5 to 7 visionaries under the age of 30, who will help them work to address a series of issues relating to microfinance, education, and the environment.

These ‘visionaries’ can be activists or social entrepreneurs, who fit a certain list of criteria, but most important of all is how they are able to answer the question, “What are you trying to change?”

If you’re wondering exactly what the aim is, the pair explain their intentions in more detail in a  a blog post:

“It has been our privilege to be inspired by great mentors and leaders in the past; now we want to find new sources of inspiration, people who are fountains of courage or compassion or wisdom.”

So why the bikes? Besides giving the project an appealing hipster quality, it also gives them the chance to really dig into the culture of the countries they’re visiting. Biking will also afford them the chance to interact far more with people, allowing them to connect with young entrepreneurs they might have otherwise missed.

Connecting with entrepreneurs will take place through on-ground-networking as well as going to institutions, including universities, incubators and local Chambers of Commerce.

So where does the citizen journalism part come in? The stories will be shared, as they develop, on the Postulate One website. Viewers will not only have a front row seat to the trip, but they’ll also have the chance to participate by offering donations, networking opportunities and more.

While 10,000 miles (mostly) on bike probably takes a pretty long time, 2 years sounds far longer than you’d expect. That’s because the team will be spending an extended amount of time with the selected entrepreneurs, filming their day-to-day goings on. The project is described as citizen journalism turned reality TV.

The entire experience will be shared on Postulate One’s media page, where photos and videos give insight into the journey and the stories of the entrepreneurs and activists Hartley and Walker meet on their way. 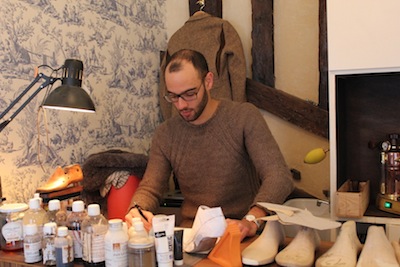 Before even heading out on their trip, they have already listed a few visionaries they’ve come across including Joan Burkovic, co-founder of the Paris-based startup Bankin’, and Black Dandy, an entrepreneur trying to bring his own sense of disruption to the shoe industry.

While the pair are already on their way, they are still raising funds for their trip, having already managed to crowdsource over $30,000 they’re just under $10,000 short of their goal. If you’re interested in donating, you can find out more about how the money is being used, and donate, here.

Speaking about the project, Hartley said, “We recognize that economic advancement is driven by the leaders who create opportunities for themselves and their communities. We’ll capture and highlight the elusive human element that affects change and empowers communities.”

If you want to find out a little bit more about the project, check out the introductory video below. We’ll forgive them the slight cheesiness of the video, because after all, Postulate One is a pretty cool idea: