Earlier this week, Michael Acton Smith, CEO of Mind Candy, the company behind the hugely successful virtual world for children, Moshi Monsters, had a ‘fireseide’ chat with David Rowan, editor of Wired UK at an event in London.

Mr Smith was very candid, starting with how he was a chess geek at school then met his co-founder of Firebox, Tom Boardman, at a chess club while studying Geography at Birmingham University. Allegedly female geography students were meant to be the prettiest females at University and geography courses only took up a few hours a week, both turned out not to be true. Firebox later went on to develop a chess set made up of shot glasses and when a player won a piece, they had to do the shot.

Firebox grew and managed to survive the dot-com crash after the millennium, though it was a close call. They’d had a chunk of investment just prior to the crash and expanded hugely just at the wrong time, so were hugely over staffed and not concentrating on their core business. It got to a state where they were negotiating with insolvency solicitors to keep the business afloat and it was a very trying time.

Firebox had hit an all time low with £400,000 worth of debt, though the actual business was sound and Smith and Boardman, moving to a tiny office in Brixton, south London, turned it around so that within a year they had made a £400,000 profit.

Though continuing to be a director and shareholder of Firebox, Mr Smith decided to branch out and start Mind Candy which would develop online games.

The first venture of Mindy Candy was Perplex City which at its peak was burning around £200,000 per month and though managing to gain around 200,000 users, only managed to appeal to a couple of hundred hardcore gamers.

On the verge of going broke, Mindy Candy then spawned Moshi Monsters. Some of the original Perplex City staff stayed on to develop the game, while most of the team was laid off. Smith got the idea from having been around many toy events where toys such as Tamagotchi were very popular, the theme being kids having to nurture their ‘virtual pets’. The website would bring this idea online.

Though the site would be based around the virtual nurturing concept, there would also be puzzles that would gain access to virtual goods or other parts of the world. This lead to the pre-release name being called Puzzle Monsters. Just before launch it was changed to Moshi Monsters and that name stuck.

After meeting some VCs to get further finance, Moshi looked like it would have a chance of succeeding, but this was in December 2008 when the market crashed, and at the last moment both VCs who had provided term sheets pulled out of the deal.

Mind Candy had about two weeks of cash left when Mr Smith met a private equity company, and though the person he dealt with had no real idea of what Moshi Monsters was all about, his kids were addicted and so he “threw a hundred or so K” at the company. This gave Moshi enough time to grow, though they had to move their monetization ideas forward and charge a subscription before they really wanted to. 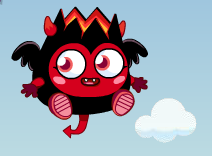 As it turned out, the plan worked and within seconds of turning subscriptions on, a mother had bought one for her child. Sign-ups grew month-on-month to the point where Moshi Monsters now receives a new subscription every second.

After the phenomenal success of the online world, Mind Candy has pursued aggressive licensing deals to launch ‘real world’ Moshi Monsters products. These are incredibly low risk to Mind Candy, as licensees pay an upfront payment as well as royalties, and hold all the stock of the merchandise. The Moshi Magazine is already the number-1 selling children’s magazine in the UK. There will be a Moshi Monsters album out next year, even though there have been legal issues around ‘parody’ pop star characters such as Lady Goo Goo, Dustin Beaver and Brocolli Spears.

Moshi Monsters is morphing into an entertainment brand and there will be a TV channel and other video outlets in the future.

As to where Mind Candy is going next, Mr Smith wouldn’t let much out, apart from saying that the next product will have ‘family appeal’.

Last summer, one of Mind Candy’s investment companies sold some of their stake to other existing investors which valued the company at $200m, Mr Smith wouldn’t say if he was ready for a sale but believes that it could become a Billion-dollar company.