Kindle may be the preeminent e-reader brand, but for those seeking alternatives to the omnipresent Amazon, Kobo has been building out its product range with some alluring devices of its own.

One of its latest efforts is the Kobo Aura, a compact e-reader that’s pitching itself against the recently launched Kindle Paperwhite (2013). We managed to get our hands on the Aura to see whether it can gain mindshare among the book-loving masses.

If you’re new to Kobo, the Toronto-based company launched its first device back in May 2010, appropriately titled the Kobo eReader. Since then, it has launched the Kobo Touch, Kobo Arc, Kobo Mini and Kobo Glo.

Kobo, whose name was derived from an anagram of ‘book’, was acquired by Japanese ecommerce titan Rakuten back in 2011, and since then has steadily grown its presence in a number of markets.

Anyway, moving on. What’s the deal with the new Kobo Aura?

Featuring a 6″ (diagonally), 1014 x 758 Pearl E Ink ClarityScreen, the Kobo Aura is markedly smaller than its Aura HD predecessor, a limited-edition device that launched back in April.

As you can see in this side-by-side shot, the Aura (on the right) will appeal to those looking for a more portable pocket reader. 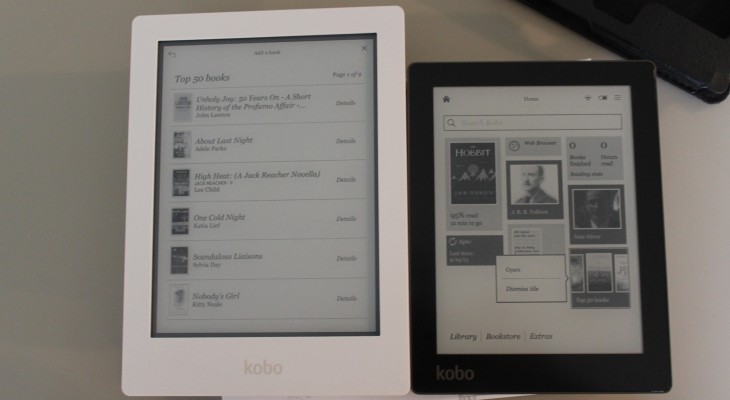 As with the Aura HD, the Aura also serves up 4GB of internal storage, expandable by an extra 32GB via its micro-SD slot.

Conversely, the latest Kindle Paperwhite (WiFi) only sports 2GB of internal storage that can’t be extended, so this could be a major benefit of the Aura for heavy readers who wish to carry a large library of books with them. It packs a punch.

These are all small differences, but they do add up. And if you’re on the lookout for a powerful pocket library, then the Aura delivers on many fronts.

Indeed, I comfortably fitted the Kobo Aura in my jeans side-pocket with room to spare, and reading with the device gripped in one hand was a breeze – this is one of its major selling points.

Of course, it’s not its only selling point. Read on to see exactly what level of bang you’ll get for your buck.

As with all Kobo e-readers, the Aura supports EPUB, PDF and MOBI e-book formats, and displays JPEG, GIF, PNG and TIFF-formatted images.

And if you’ve already been using Kobo via an app (Mac, PC, iOS, Android, and BlackBerry 10), you can access all your books and bookmarks on the Kobo itself, through cloud synchronization. Plus, you can search for titles and purchase these directly through the e-reader – but remember, this doesn’t have 3G, so you will need WiFi to procure new titles.

The choice of colors isn’t extensive – you have black or pink. But again, this likely won’t bother most people.

On the bottom rim, is the micro-USB and micro-SD ports.

Along the top edge you’ll find the power and light buttons…the latter’s location is well-positioned to make it easy to access as day morphs into night.

The Kobo serves up reading stats that let you track your progress through books.

And the menu button on the top-right of the screen gives easy access to battery information, WiFi and sync buttons, and Settings.

Now, settings is where you can tweak date and time, change languages, sign-in to Facebook to share your favorite passages, quotes, and books, and a number of other things.

But interestingly, there’s an option to integrate your Kobo with read-it-later service Pocket. Blink and you may have missed the news, but Kobo and Pocket announced this partnership back in August.

The Kobo Arc 10HD, Kobo Arc 7 and 7HD tablets, as well as the Kobo Aura, all ship with Pocket integration as standard, while a recent software update also bring this feature to older models.

For me, and the millions of others who love Pocket, this tie-up is a revelation, and means you can catch up with all those long-reads you’ve been saving from across the Web.

Tucked in near the bottom of the settings menu is ‘Beta Features’, where you’ll find chess, sketch pad, Sudoku…and a Web browser.

Yes, as with the Aura HD, Kobo lets you browse the Internet with its latest ereader, though this has now been classified as a ‘beta feature’, which is probably about right.

Indeed, e-readers and tablets are different things, and it is important not to confuse the two. The responsiveness of the screen here isn’t quite what you have become accustomed to with other touch-enabled devices in recent times, thus typing and scrolling and browsing could get a little frustrating if you were to try to use this as a primary Internet device.

However, it works. And if all you need is to check some news or football results, it will likely serve its purpose well enough.

The Kobo Aura is a very impressive device in many ways – it doesn’t offer much in the way of bells-and-whistles, but then that’s what an e-reader should be like. It’s not a tablet – it’s about reading books.

Where the Aura really comes into its own is its size – it’s a truly compact and portable e-reader. Combined with the 4GB of internal storage and expandable memory, then you can carry a hell of a lot of books around with you.

If you’re more about reading at home in bed, and rarely have more than a few books on the go at any one time, then the Paperwhite will probably come out trumps.