Back in July, we presented you with the past, present and future of augmented reality (AR) technology. Even the biggest AR cynic can’t deny that transposing digital information onto a real-world view has produced some pretty awe-inspiring outcomes in recent times. But there’s still no getting away from the “wow, that’s cool…” statement that’s usually followed by “what do I do with this, exactly?”

The biggest criticism of AR is typically that it’s too gimmicky. It gets hoards of people crowding ’round at exhibitions cooing about how cool it is, but it’s often difficult to see any useful real-world use-cases for the technology. Furthermore, holding your smartphone or tablet out in front of you doesn’t seem like the most natural way of experiencing AR.

The Next Web was invited along to meet Vuzix last night, to see what the future of video eyewear looks like. Vuzix Corporation is a pioneering manufacturer of video eyewear technology and personal display devices for the mobile video, entertainment, defense and commercial markets.

Each year, Vuzix provides thousands of its display systems to the military and other companies for night vision and other applications. The company is actually the lead supplier to the US Army’s Future Force Warrior program, providing head-mounted displays and is working under contract with the US Special Operations Command (USSOCOM) to deliver next generation displays for fighters.

We got to test out the recently launched Wrap 1200 video eyewear, which is a consumer-focused product 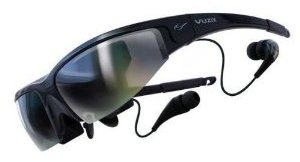 that can be used with media players, portable DVD players, gaming consoles, cell phones and laptops.

Vuzix has also just announced that its Tac-Eye Monocular Display System is available for purchase in Europe. The TacEye LT is a pretty lightweight, high-res monocular eyewear designed for use ‘in the field’, wherever hands-free video displays are needed. So at the moment, we’re mainly talking about industry.

That’s all very well and good. But the technology we got a glimpse of last night went several steps beyond that.

Video eyewear is typically quite clunky, but Vuzix has been developing some pretty innovative new technology which could completely shape the the future of AR video eyewear.

Vuzix recently announced a technology license agreement with Nokia in Finland to produce see-through waveguide optics for use in near-eye display (NED) systems (head mounted displays and video eyewear), built on Nokia’s see-through (Exit Pupil Expanding) EPE optics technology. The agreement will see Vuzix’s and Nokia’s technology brought together, and it’s expected to accelerate the development and introduction of new NED products to the market.

The see-through EPE technology has been developed and prototyped by Nokia over the past decade in various forms and Vuzix believes it has the potential to form the basis for sunglass-styled video eyewear, which could be manufactured in high volume and appeal to mass consumer markets.

“We believe that Nokia’s EPE technology solves a long missing piece in the NED business for creating sunglass-style video eyewear,” said Paul Travers, Vuzix President and CEO. “Integrate this Nokia technology with Vuzix’s advanced display engine developments with partners like Fraunhofer IPMS, and we expect to be able to offer the video glasses that Hollywood and Sci-Fi writers have only been able to imagine.”

Whilst photos don’t really do the technology justice, we caught a glimpse of what it looks like. It’s basically one very thin layer of glass, which has a small chip by its side which shoots streams of light that penetrates through the glass, letting the user view images contained within the thin layer. The projector in this photo is used just to demonstrate how it works:

Vuzix recently signed a research contract with the Defense Advanced Research Projects Agency’s (DARPA) Persistent Close Air Support (PCAS) Program in the US. PCAS is helping to fund the development of a high definition (HD) micro display and a see-through holographic optic. This technology is expected to be rolled out with DARPA in July next year.

A couple of days back, we also reported on augmented reality contact lenses, which are currently being tested out on rabbits by a US/Finnish team at the University of Washington.

It’s all very futuristic, but the future  – it seems – is almost here.