Guardian News & Media (GNM) today unveiled its latest innovation for mobile; King’s Cross, London Streetstories. It’s essentially an audio street guide, based in the area of London where the Guardian offices are located, but it allows the listener the freedom to wander as they please instead of following a directed route.

The app triggers audio stories and information as you reach particular parts of the area.  It can also be used manually if you want to hear something specific or if you are not in King’s Cross and maybe want to hear about it while you are elsewhere.

The nice thing about the geolocation facility is that you can walk around the area hunting the audio placement without having to study your phone. In an area as busy as King’s Cross, this is a great idea, otherwise you’ll be bumping into angry commuters and street furniture.

There’s also a clear map, so if you are in a place with fewer people (or stop to check) you can plan a route through the audio. Transitions are smooth and naturally being a Guardian app, the design is fresh, easy to use and easy on the eye.

The app was produced in-house at the Guardian, and developed in partnership with Calvium, the Bristol-based company behind the AppFurnace app development engine.

Topics covered include street workers, the 7/7 bombing, The German Gymnasium, Charles Dickens and Kings Place, the home of the Guardian offices. This makes for a nice mix of contemporary, historical and literary material. 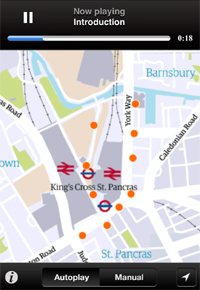 The audio quality is superb with fantastic production values. There’s a lot of attention to detail when it comes to background sounds, additional atmospheric music and clarity for the spoken word. With this multi-layered audio in place, it really creates an immersive and arresting experience.

Interestingly the app continues to play audio and soft music between the spoken word passages, rather than stopping and starting. This helped me stay tuned in and made me want to find the next story.

While testing the app, I was sitting in a quiet environment rather than wandering the streets of Kings Cross, so I’d like to check how the audio stands in a much noisier and bustling environment with plenty of distractions.

As ever, battery life is an issue with any app. King’s Cross, London Streetstories is unlikely to drain a fresh charge, but it’s something to consider and you won’t want to leave it running.

I’m a big fan of audio apps and games as it often feels that sound is not often at the forefront of creative mobile development. The rich variety of material on the app also makes it much more interesting than a plain historical guide.

The app is available for Android and iOS with 10 audio stories to download via 3G. There’s also a version called ‘iPhone extra’ with 70 stories to listen to. It’s also free, so a good way to treat your ears to a little stimulation.

Now of course I want to hear about all of the rest of London and other cities, all over the world. No pressure.