The Guardian is partnering with the augmented reality app Blippar to feature interactive ads and content in its print edition, the British newspaper announced today.

As we reported, Blippar is specialized in helping brands such as Cadbury, Guinness and Sony add an augmented reality layer to their content. Besides brands, it is also increasingly working with media outlets; a few months ago, it partnered with the Irish newspaper Metro Herald to create “the world’s first fully augmented reality newspaper.” 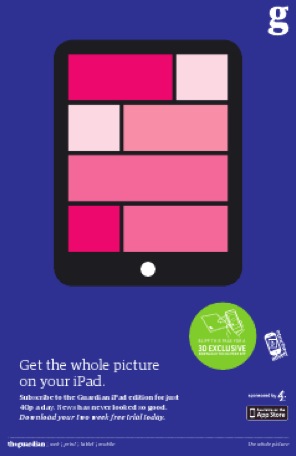 As for its partnership with The Guardian, it also includes both advertising and editorial content. Over the weekend, the newspaper will run what it describes as “its first augmented reality print ad”. Here’s a preview of the ad and a description of what it does:

“When users ‘blipp’ the advert on their smartphone or tablet device using the Blippar app, the advert will be transformed into an interactive experience, through which users will be able to enter a competition to win a 12-month subscription, watch a video about the thinking behind the app and, if using an iPad, tap on a link to the app store so they can download the Guardian iPad edition.”

If you are wondering how readers will find out that additional content is available via image recognition, here’s a zoom on what Blippar’s call to action looks like:


While this weekend’s action leans on the advertising side, Blippar and Guardian News & Media have also worked together on editorial content earlier this year around the newspaper’s ‘Battle for the Internet’ article series.

As we reported a few months ago when we reviewed the Brazilian startup Crossfy, augmented reality in newspapers is becoming a global trend, as media outlets around the world work on building bridges between print and online content.