As consumer technology evolves at an ever-quickening pace, opportunities for new forms of storytelling are emerging. Experimentation is all well and good, but what do audiences actually want? To answer this question, research group Latitude has interviewed 158 early adopters and compiled a report that forms the first phase of its The Future of Storytelling project.

Unsurprisingly, these early adopters are keen to take advantage of everything that technology has to offer. Their key demands are summarized in Latitude’s report as ‘The 4 I’s’: Immersion, Interactivity, Integration and Impact. Essentially, they want to be able to explore a story in greater depth, and have it reach out of the confines of a single medium and play out in ‘the real world’.

The people Latitude spoke to were very keen on ‘transmedia’ experiences – stories that are told over multiple formats (think TV dramas where characters have real-life social media profiles that help tell the story). 82% of participants were keen on mobile apps that would complement, not just replicate, their TV viewing experiences. 79%, meanwhile, wanted to be able to alter storylines by influencing characters or by becoming characters themselves. 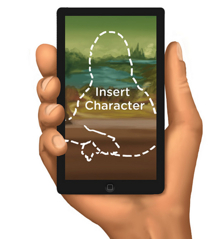 The two-way dialog made possible by the Internet appears to have affected early adopters’ expectations when it comes to influencing the direction of stories, with 93% of participants expressing interest in submitting story ideas to producers. There was significant support for the crowdfunding of storytelling projects too.

Perhaps most interestingly, 52% of participants viewed the real world as a storytelling platform, saying that they’re keen on stories being told through networked real-world objects, augmented reality, 3D projected environments, and the like.

We can see examples of these kinds of storytelling advances around us already. ‘Transmedia’ was coined as a phrase as far back as 1991, and cross-platform stories are increasingly showing up in mainstream productions (for example, Australian teen drama Slide).

Audiences are increasingly influencing producers directly (see the expanded ending created for videogame Mass Effect 3 after fans expressed disappointment and anger at the initial conclusion), and crowdfunded film projects are commonplace now. Meanwhile, experiments like the BBC’s Perceptive Media have the potential to tailor stories to our precise preferences without us even realizing it.

Of course, while the ideas expressed by early adopters in Latitude’s report may point to future mass trends, good old-fashioned passive story consumption is likely to continue as the preference of most people for many years to come. After a long, hard day in the office, do you really want the stress of deciding the fate of soap opera characters too? That said, an interactive version of 50 Shades of Grey would probably be a runaway hit.

Latitude is currently working on phase two of its study, which it describes as “a large-scale international exploration focused on quantifying storytelling trends and opportunities, and understanding key audiences for multi-platform and transmedia experiences.” For now, you can download the phase one report via the link below. Also, don’t miss our previous reports on Latitude’s studies on what children can teach us about technology and how children think of technology as fundamentally human.

➤ The Future of Storytelling report (phase one) PDF