Vince De Franco is a musician who works on the frontiers of technology to change the way that artists can create new sounds. If you listen to Tool, U2, Peter Gabriel or Alice in Chains, you’re likely to have heard his work, even if it’s not immediately clear.

De Franco has created technologies that enabled musicians to play the Roland D Beam and the Mandala Drum, but in the near future, he says we can all be musicians, by harnessing the music in our minds.

TNW had a chat with De Franco about how a physics student came to tour with rock bands and how musical people are, even if they cannot sing a note in tune.

Vince De Franco was physics and electrical engineering student who tore up computers and hacked around with sounds from an early age. He played guitar from the age of ten and pursued an interest in electronic sounds when the synthesiser was still growing for commercial use.

“The hybridisation of electronics and instruments always fascinated me,” he says. “From the age of 12 I was hacking the inside of the Apple computer to record audio waveforms from microphones, then analysing and processing those signals with mathematical formulas.”

With those credentials as a kid, it seems that De Franco was set on innovation from a very early age. But it was mainstream music that really kicked off his career as a musical engineer and performer.

“Music became prominent in my life with the explosion of MTV. Its arrival coincided with my teenage years and it created a basis of music appreciation which became music creation.”

While he played piano and a Stratocaster as a kid, the move to college in California introduced him to Midi and further consolidated his electronic music exploration.

The Midi held De Franco’s attention because of its relation to the work he had already studied in physics and maths.

“Underneath it all, with Midi, there is no component that is audio,” he observes. “It’s control signals. Just mathematics or a symbolic system to control music. As sheet music is to musicians, Midi is the written language of music in an electronic form.

“Through my visions of seeing things from a physics point of view, from chaos theory  to uncertainty principle and relativity, I could see that there there’s a language of mathematics underneath that. There’s also a language of Midi underneath music. That’s how I crossed the bridge.”

Everyone is a musician

Vince De Franco sees a musical ability in everyone. Though many of us claim we can’t sing a note in tune or on time, he has a point about the way people communicate.

“Everybody is a musician,” he says. “The way we speak is rhythmic, what we say is tonal, there’s a timbre to our voice, so what we experience in life comes out through our instrumentation. Whether it’s an acoustic guitar or an analogue synthesiser it’s still an expression of the artist. I saw electronics as an extension of the traditional instrument set.”

Being a pioneer in music meant that when the music world caught up, De Franco was ready to help out with new sounds and ways for musicians to express themselves. “Where I was in the heavy rock, metal scene, electronics hadn’t made its way in to begin with, but soon it was time. The introduction of synthesisers and sequencing became more accepted in this genre in the 90s.”

The projects he worked on became patented technologies that are now accessible to artists the world over and are mostly down to De Franco’s need for high-definition sound and to access more options for the music he was able to create.

The Dimension Beam is a radiated emission space. A transmitter and a receiver are placed next to each other on a circuit. The transmitter sends out infrared light on an active sensing zone above it. Put your hand in and it will sense how much light is reflected back to it. This action can change the tone or timbre of a sound and can essentially be played with anything from the neck of a guitar to the human body.

It might sound a little esoteric, but the idea was taken up by well-known musicians and the technology went on to be licensed by the Roland company as the D Beam.

“I was lucky enough to have Stevie Wonder step up to a synthesiser and play,” says De Franco. “As he leaned forward, the filter would change in the sound he was playing with his hands on the keyboard. So, his body would become a part of the performance.”

The underlying technology behind the D Beam existed while De Franco was taking a break from study at UCLA to work at the Record Plant Studios. 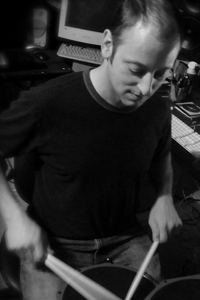 “Someone came to bring an infrared light beam in for Prince,” he notes. “I stayed in touch with that company. It was a nice cross between engineering and music. Eventually I ended up working for them to turn those individual light beams into full resolution light beams with a thousand different levels for detection. I said to myself, I want to hook this up to Midi, have a continuous controller and  I wanted to use it with my guitar. It all went from there.”

The Mandala Drum development came about because of a request from the band Tool. De Franco’s own band ‘Engineer’ had toured with the group and the drummer, Danny Carey wanted more flexibility from his kit.

“What was being used at the time was a system that knew where you were playing across three zones on the drum,” explains De Franco. “In designing a pad for him I came up with hundreds of zones that I could break down into as many as he wanted.”

De Franco is a great supporter of new musical possibilities that arrive through the creation of mobile apps. He says that these instruments are the ones that can bring about more creative output that can drive new music.

“Whether you’re the Beatles working with an 8-Track recording or Radiohead working with Kaoss Pads or Jimi hendrix with a stack of Marshalls and fuzz pedals, it’s  that new sound that really helps music overall. That’s what these little devices are doing and they’re putting that ability in a lot more people’s hands.”

Creating a new technology for musicians is one thing, but the idea of emitting sounds from our minds sounds like something from a science fiction novel. However, De Franco can see connections that might bring this type of sound creation much closer than we think.

“There’s a lot of research already going on and it’s always in medical circles,” he remarks. “Brainwaves are being translated into control signals for mechanical devices. So, they’re getting closer with MRI techniques and sensors for translating thought patterns into something tangible.”

According to De Franco, it is only a logical step that a series of tones can be output from your brain to a device. “It will free up a lot of people from their shy selves to a more expressive group,” he says.

If there is a chance that brainwaves can be read to output music, then the problem of being tone-deaf as a singer could become a thing of the past. “A lot of people hear songs in their head and have no skill or technique to express it so another human can understand,” says De Franco. “It doesn’t  mean it’s not a beautiful sound. People are working on ways of getting that out onto a score, or via electronics. But I’m not talking about a learning curve to play another  instrument, I’m talking about one-to-one output to get it out of your head.”
Taking music directly from the minds of new musicians could mean a lot of new noises that had been difficult to express through traditional instrumentation and skills.

“There would be unbounded individuality in this type of expression,” says De Franco. “As much as we each have our own voice when we speak, we have a fingerprint music inside of us as well. You’re a walking score, a walking musical creation. With sensory devices you may be a walking score that other people can understand in terms of tones and music.”

If you’re thinking this will take decades to develop, De Franco has more optimism and naturally it is an area that he hopes to refine. “I wouldn’t be surprised if there’s some kind of viable mental music creation device available in five to ten years. It will be in a clunky fashion at first, but as with the Mandala drum, I am working on high-resolution. I want to be a part of keeping that resolution high so that the output is exactly what you are thinking.”

It might not be an expectation in traditional education that nerdy kids would be rock stars. But De Franco’s career has turned social assumptions about young physics and maths students upside down.

“My interest in academia, devotion to the sciences and being in bands might seem like opposites,” he observes. “If that’s what you do and that what you are; then it’s what you become. It gave me the special chances and experiences I had in life.

“That aspect of my past allowed me to have these special occasions of playing live on stage with bands at Madison Square Garden. It was that devotion to science and technology fused with musical education that really made everything possible for me. I’ll always be a proponent of learning, continuing to learn  and incorporating new visions into the current norm. Push the state of the art.”

All of which reaffirms what we already know as people who love the cutting edge of technology. Mathematics, rocks.