This article was published on October 8, 2011

It’s become a firm fixture of everyday life, loathed by some but essential to nearly all of us, and yet its future is far from certain. Email is forty years old this month, with the first message having been sent in October 1971.

The birth of email

Like many technological innovations, email has its roots in military technology. In the late 1960s, MIT graduate Ray Tomlinson was working at research and development firm Bolt, Beranek and Newman. His work included contributing to technologies related to the ARPANET, the military communications network that was the earliest form of the Internet. This included a file transfer program for mainframe computers.

With this file transfer experience, Tomlinson was assigned to modify a program called SNDMSG, which allowed messages to be sent between different users of the same computer – this was in the days when computers were incredibly expensive, and the idea of one person having a computer to themselves was impractical. His task was to allow messages to be sent between two different computers, and in October 1971 he cracked it.

As Tomlinson told The Times in 2008, he doesn’t remember what that first email actually said – perhaps ‘QWERTY’ or another string of characters, but whatever it was, it traveled a distance of one meter between two separate computers. One small step for a message, one giant leap for mankind.

Besides inventing email, Tomlinson is also the man to thank for the popularity of the ‘@’ symbol. He established the convention of an email ‘address’ in order to identify the recipient and the computer or network that they were using. To separate these two pieces of information, he chose ‘@’. He told The Times,  “It conveyed a sense of place, which seemed to suit.”

The growth, growth and growth of email

Email use on ARPANET quickly took off after that first message in 1971, but it wasn’t embraced on a wide scale until the 1990s when the birth of the World Wide Web led to consumers embracing the Internet. By the end of that decade, it had become an essential part of working life in many offices around the world.

Back in 2001, the School of Information Management and Systems at UC Berkley reported that around 31 billion emails were sent daily. By 2008, that figure had risen to 170 billion each day, at a rate of 2 million per second. It hasn’t stopped accelerating; Pingdom reported that in 2010, the daily rate was 294 billion. 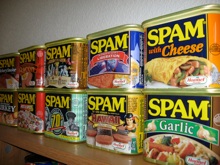 Despite its convenience, many of us have grown to see email as a bit of a chore.

Spam is the best known problem with email. From unsolicited marketing messages to scams attempting to trick recipients out of cash, spam is a true scourge of the Internet. A report by Nucleus Research in 2007 claimed that email cost businesses $712 per employee per year, with that figure coming from factors like the working time spent deleting unwanted messages and the cost of anti-spam technology.

While spam blocking has become more sophisticated over the years, shielding some of us from its immediate impact, and high profile cases have seen spammers prosecuted, the problem is far from dead. Pingdom claims that 262 billion spam messages were sent daily in 2010, that’s 89.1% of all emails sent.

Even disregarding spam, dealing with the legitimate messages has become a significant task for many. In 2008, The Times quoted stats that said office workers spent an average of 49 minutes per day managing their email, checking their inbox 30-40 times per hour. With the increase in the number of emails sent since then, the amount of time spent reading, writing and replying to email is likely to have risen too.

It’s a situation that has led to some people to attempt abandoning email altogether. While that’s impractical for most of us, a little bit of discipline goes a long way. One of the most popular strategies in recent years has been Merlin Mann’s Inbox Zero, a way to “reclaim your email, your atten­tion, and your life. Even when email was a much smaller deal, co-founder of The Next Web, Boris Veldhuijzen van Zanten had a simple but effective routine for getting through over 500 customer support emails at V3, the startup he co-founded in the late 1990s. This proves that it’s possible to tackle even the most daunting inbox if you have a strategy. 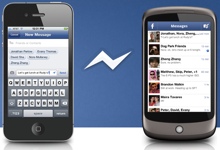 The very fact that many of us need to think strategically just to deal with the messages we receive proves just how much of an impact email has on our lives, but the future may well see its usage decline, replaced by more effective ways of keeping in touch.

It’s a well documented trend that children an young people opt to communicate via methods such as Facebook messages and BlackBerry Messenger over email. A ComScore study on 2010 digital trends in the US found that Web email usage saw an 8% year-on-year decline in 2010 overall, with a 59% decline in use among people aged between 12-17.

Why would young people opt for methods other than email? Mark Zuckerberg said in 2010, “High school kids don’t use email, they use SMS a lot. People want lighter weight things like SMS and IM to message each other.” It’s true that if you use Facebook’s Messages platform it feels faster, more nimble and more ‘alive’ than email. When the company overhauled its messaging service last year it made an email-style message on the platform equal to an IM or an SMS. In fact, someone can send a standard message, composed like an email, within Facebook and the recipient can receiving as an SMS, replying by text message. It really does feel like an evolution of what email achieved. 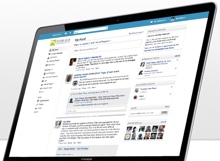 Email is an essential business tool, and it’s unlikely to be replaced by Facebook any time soon, but internal communication within companies can be more effective by replacing emails with online collaboration tools like Yammer and Convofy. Replacing sprawling group emails with structured discussion threads keeps everyone in a team informed about each other’s activities in a much clearer way than email can.

Services like Basecamp and Podio allow external clients and contractors to work alongside internal team members too, putting an end to the need for much of the email conversation that takes place during projects. While still in their early stages of adoption, these types of tools could easily eat into email usage in the workplace on a vast scale.

Still, while proprietary platforms like Facebook and Yammer may replace a lot of email in small, closed or semi-open groups, nothing has arrived yet that beats the open, universal nature of email. If you want to get in touch with someone, you can bet they probably have an email address. If you can find it, you can contact them.

So, while its usage may well decline, email’s far from dead. [email protected] birthday email!