Finding a new meme is like those first few dates with someone you just met and are really into: you laugh all the time, you’re excited about everything they do, you want to hear every word they have to say. If you really like them, you are checking back with them constantly, giving them all of your attention, and telling your friends about how great they are. But soon, their stories get a little repetitive; they start to lose your attention, and you might even start to look elsewhere for other attractive offerings.

Unlike a romantic relationship, it is easy to quit a meme when you aren’t interested in it anymore. Given the lifespan of a meme is often that of an insect, moving on quickly from one meme to the next is part of the excitement. This kind of activity puts memes on the “hit it then quit it” end of the loyalty spectrum. 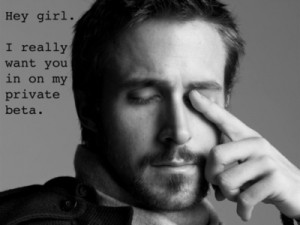 But what about the people who make the memes? How does a meme creator know when it’s time to quit putting in time, energy or content? As the author of the Tumblr Silicon Valley Ryan Gosling (SVRG), I’ve been struggling with this question for half of the life of my meme, which is about the last two weeks.

In an effort to find some answers, I spoke with Michael Selvidge, the creator of Callin’ Oates, which went viral just a few days before SVRG was picked up by The Next Web, rocketing it into Internet memedom. With memes roughly the same age, and as first-time meme creators, I thought Selvidge and I might commiserate on meme fatigue and knowing when to quit.

Callin’ Oates is a telephone hotline people can call to hear their favorite Hall and Oates songs. Selvidge created the hotline out of his genuine love for Hall & Oates, but also to answer his employer Twilio’s challenge to develop on top of their API. Selvidge answered Twilio’s challenge, went viral and garnered a huge following. Now, just over a month after the birth of Callin’ Oates, Selvidge is considering his responsibility regarding the project.

“During the meme’s peak, the Twitter messages were coming in by the minute, but recently, those mentions have slowed to a drip,” he said. “I feel less and less responsibility to keep it up every day.”

In the early days, or even hours, of any potential meme, the first few responses are a thrill.

“If I had known before I made [Callin’ Oates] that a few hundred people EVER would even know about it, I’d be stoked,” said Selvidge.

If you are lucky in the meme world, people start paying attention, and eventually, the thrill comes from the sheer speed of activity that we call “going viral.” At its peak, Callin’ Oates had about 500,000 hits per day, but now receives just a few hundred. “Today’s daily number is such a small percentage of what it once was, it feels like it’s over,” said Selvidge.

“The Internet is so fickle. It had already moved on to another meme by the next week. I put in the same amount of effort for diminishing returns,” Selvidge said. I have to agree with his sentiment. I’ve watched Tumblr notes on SVRG wane to a few dozen a day and new followers are down to just a few a day, telling me it is probably time to quit that meme. Being a novice meme creator, I consulted The Complete Idiot’s Guide to Memes, and as would be expected, the death of a meme is marked by when it stops spreading. So why continue to put effort into a meme that has seemingly died? Or as Selvidge put it, “clinging to my faded past of Internet fame.”

In the sunset of SVRG, I am just as appreciative of those late adopters as I was of first followers, but it is nearly time to move on. Selvidge agrees, “I don’t know if I’ll ever have something go viral again, but I have to move on to other stuff. It is this paradox that is the rub of meme creation, at least for your first.” While we meme creators love our memes, eventually we must let them go, and in the words of Hall and Oates: “It’s a bitch, girl.”