We’ve all seen the numbers. Mobile devices, operating systems, attention, and apps are exploding in a way that is unlike anything the computing world has ever seen. And with only one in seven phones a smartphone, there is still massive upside.

In the consumer world, these trends are already wreaking havoc, with Facebook in the middle of the storm.  Mobile-only Instagram may have been on pace to sprint right past Facebook in photo sharing, before Facebook took them out.  Facebook’s lagging stock price is seen by many as a direct reflection of haziness around how it will make money as its usage shifts to mobile.

Not content to sit back as the world changes, Facebook seems to be gamely trying to chop up its monolithic web app into lightweight, mobile first ones (Camera+, Messenger).

But what does the meteoric rise of mobile mean for the enterprise world?  I think it can be summarized in one word: Deconstruction.

So here is the argument.

Enterprise systems have evolved over the course of decades to be powerful, feature rich systems, optimized for desktop. Take Salesforce, for example, a relative new kid on the block in the enterprise world.  Salesforce’s Sales Cloud documentation boasts 57 top line features, that no doubt house hundreds more sub features. And if cloud deployed Salesforce appears complex, one can only imagine the complexity of some of the older enterprise systems that lurk behind the firewall in ERP, CRM, and HRMS.

In a desktop-first world, this sort of feature set show-of-force makes perfect sense. It’s a moat against would be competitors (how can any startup match Salesforce feature for feature?), and a nod to the traditional, checkbox based approach to purchasing decisions.

Mobile is quite a different beast, however. With less real estate and often less bandwidth to work with, mobile tends not to reward feature complexity.

This drive towards simplicity gets exacerbated when the cloud enabled self-serve distribution of enterprise software gets thrown into the mix.  Suddenly, software can be written for, and distributed directly to, small enterprise teams with very specific workflows, without requiring a sales call.

Together, the rising tides of mobile and cloud imply that the pendulum of enterprise demand will swing dramatically in favor of simple applications as opposed to complex ones.

So is it possible that the hundreds of features that enterprise incumbents have spent decades building and refining have become less of moat, and more of a millstone as the world goes mobile and cloud? Perhaps. But like Facebook on the consumer side, don’t expect the enterprise software incumbents to go down without a fight. 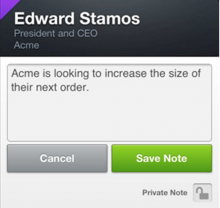 A peek in the app store will show you that Salesforce is already dabbling in deconstruction – check out “Logger,” for instance, an app that exists solely to help salespeople update opportunity records from their phone, with none of the other Salesforce bells and whistles including.

In looking at the numbers, it’s hard to argue against the fact that the world is going mobile first, with huge ramifications for software design and development.  It’s also difficult to debate that existing, feature rich enterprise software will struggle in this mobile-first world.

And if the consumer world is any guide, the enterprise incumbents will soon be in a Facebook style frenzy to reinvent themselves.

It appears that we are on the verge of a massive deconstruction of enterprise software. That systems that were once defined (and valued) by their features and complexity, will soon need to become the opposite – suites of lightweight, mobile first apps that work together to accomplish the task at hand. Put more explicitly, this line of thinking says that the next great CRM application, for example, won’t be a single app at all, but a suite of mobile first apps that carve up and atomize the workflow into mobile optimized tasks.

So perhaps the only question that remains is this: Who will be the Deconstructors? The incumbents as they react to the twin waves of mobile and cloud, or the startups who were architected for the new realities to begin with?