Look at this letter: “O”. Closely. Does it look like a perfect curve? A little jagged? A little bit scraggly around the edges?  You might as well enjoy these boxy jig jags while you can because the rumors are true: Apple’s about to unveil its iPad 3 “Retina” display and banish the pixel forever!

Here at the science desk, we’ve taken notice of the hubbub over disappearing pixels and went looking for answers. We know its a big deal when renegade Foxconn factory workers must have been sneaking past their suicide prevention netting to get reporters the 9.7″ slab of pre-release joy.  You can see even see a video of one lucky reporter handling the smuggled display over at iFixit.

The big deal is actually small. Very very small. Less than 100 microns small. These shrunken pixels mean a screen with high pixel density. Apple says that “the Retina display’s pixel density is so high, your eye is unable to distinguish individual pixels.”

But why do pixels matter? As we set out to unlock the mysteries of the pixel’s importance, a few world-class scientists took the time to explain to us the details of our brain’s retina (yes, it’s embryonically a part of the brain!) as well as some awesome studies showing how our brain shuns those jagged squares in favor of something curvy.

Read on to see how our brain is responding to pixelated Kate Upton.

We’ll start with the retina: (and then move on to the curves.)

“The Retina is a terrible name to give a display”

Dr. Donald Hood, the James Bender Professor of Psychology at Columbia University, teaches courses like Mind, Brain and Behavior and conducts research on the physiological bases of the visual process. He explained that, far from being a display, the human retina is actually more like a processor, a “piece of the brain that does complicated analyses of the visual scene.”

Hood explained that the retina is not the limiting factor in how many pixels we can see, but rather it’s the “size and density of the cone receptors”. While “Cone Display” (our catchy term) might get closer to what Apple’s bragging about with pixel density, there’s another aspect of eye science that brings us to the all- important visual frontier: optics. 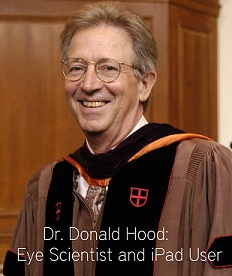 The Limits of Optics: Keep that iPad 13” from your face

The optics refer to the lens and cornea, analogous to the lens and aperture of a camera.  These handy anatomical contraptions manipulate light to support the processing of the cones and retina. Our optics limit our ability to see a point to about one “arc minute”.

Basically if you picture a degree, like those that make up a 90 degree or 45 degree angle, then an arc minute is 1/60th of 1 degree – pretty small. If you put an iPad in front of your face and then move it away, it will appear to be getting smaller. The iPad, of course, stays the same size, but the amount of angle it takes up in your view decreases.

Apple’s new display has 263 pixels per diagonal inch. So each pixel is, diagonally, 1/263rds of an inch (0.00380228137” for those playing along at home). Using this handy angular size calculator, we find that you’d have to hold your iPad 3 no closer than 13 inches from your face to get a pixel below that 1 arc minute threshold.

Even then, explained Hood, the limits of the eye’s pixel perception might not be reached.  In many cases, we can perceive below the arc minute to the arc second! “For example, a single bright point has no lower limit in size as long as intensity can be increased.  More to the point, under optimal conditions, a single black line of less than 1/60th of an arc minute can be detected on a white background.”

So pixel density isn’t all that important, but yet you still have a burning passion to figure out how your primitive not-Retina device ranks? So did we. You’re in luck because all you need is a piece of standard size paper and the “Paper Pixel Ruler” to see how your gadget measures up.

Curves – A pacifier for your brain

Dr. Pablo Tinio, Professor of Education Psychology at Queens College, studies how the brain processes aesthetic preferences. He and his colleagues think that the brain has “evolved automatic and hardwired responses that help us avoid the dangers posed by sharp things”.  He and cohorts Helmut Leder of the University of Vienna and Moshe Bar of Harvard Medical School use sharp and curvy versions of the same objects to study our curve preference.

In a separate study, Bar and colleague Maital Nata used brain imaging to discover that humans have a subconscious neural reaction to sharp objects:

Take notice, hipsters: As you can see from the neural image above, our primitive amygdala region reacts anxiously to sharp-edged watches.

Pump up the volume, (don’t) bring the noise.

Tinio explained further that the iPad 3’s Retina display might be pleasurable because “people like curves and dislike visual noise in images” and “pixilation in images is a type of noise”. We like things easy, and more noise means more work sorting through it.

According to Tinio, “High-density displays might be more pleasurable because they are easier for our visual and neural systems to process.”

Seeing a jagged, pixelated image, whether it’s of a model, forest or watch, tends to unsettle us more than things that are smooth. “Highly pixelated images are preferred less than images with minor pixelation,” noted Tinio.

Hood explained that our retina “has all the complexities of the brain” and perception is much more complex than simple pixel size measurement. Nevertheless, our little inquiry does suggest another win for Apple. As Hood pointed out “I do love my high definition TV”.

Bring on the curves.