There’s a big difference between a smartphone and a TV. As developers increasingly look to the opportunities of TV, they will have to shift their focus from thinking about a personal experience to a communal one – and I can’t wait to see what they come up with.

The transition to a more ‘app-centric’ approach to TV seems inevitable – Google is courting TV-focused developers, Apple is said to be launching a TV SDK at WWDC next week, Opera and Samsung have TV app stores, and there are bound to be many more opportunities to get apps onto our TVs in the future. While startups well versed in desktop, mobile or Web app development may be tempted to make that leap to the largest screen in the house, developing for TV presents unique challenges that will require some serious thought.

Unlike your smartphone, tablet or laptop, a TV is first and foremost a communal device. We like to huddle around it in groups of family or friends after a hard day’s work. That means that the apps we’re used to using on our other devices won’t necessarily translate to TV particularly easily.

I have a certain discomfort, for example, with the idea of my personal iCloud Photo Stream feeding into my Apple TV where anyone who’s watching can see it – the screenshots of apps and photos of speakers at conferences that populate it are intended for me (and perhaps you, dear reader), not for a communal audience to scroll through on a big screen in my house. Likewise, the idea of viewing the latest tweets from the people you follow on Twitter while watching a movie with your family seems unappealing.

It seems logical that the big boys of the app world, from Twitter and Facebook to Evernote and Spotify will want to get onto our TVs, but while they’ve until now focused on offering personal experiences (your interests, your friends, your notes, your music), the challenge will be to rework their offerings into something that works on a big screen, in front of an audience. After all, you probably wouldn’t want to send Facebook messages to your friends in front of your family, and they’d probably find it a pretty dull experience, too.

Can we make the personal communal? 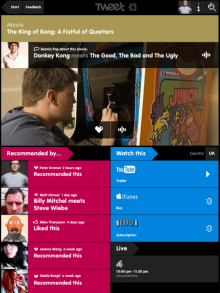 There are ways some of our favorite apps could be reworked for TV. A Twitter app that displays tweets from other people watching the same show as you could be fun, although arguably better served by a ‘second screen’ app like Zeebox, or simply your favorite mobile Twitter client. A ‘social TV guide’ that uses your Facebook friends’ tastes to recommend what you should watch (in the mould of iPad app Tweek) is an excellent app for use on a TV, especially if it can combine multiple people’s Facebook accounts to recommend something that everyone in the room will like.

The exciting thing is that there is a big opportunity for completely new apps and services the likes of which we’ve never seen before to conquer our TVs, designed from the ground up for communal use. What will they be? I’m not 100% sure, but it will be these apps that will sell the idea of apps on TV to the masses.

Whatever happens, a TV shouldn’t be just another computer – it’s primarily a communal device, and the most successful developers will be those who treat it as such.