The BBC irked many UK iPlayer-users a few months back, when it quietly removed the ‘Favourites’ feature from the Android app. All it said at the time in the iPlayer help section was: “Favourites has temporarily been removed from the BBC iPlayer Android App, but will return in an update at the beginning of 2013.”

Well, the feature has now been reintroduced in the latest version to hit Google Play,  as well as a handful of other tweaks, including image quality improvements, bug fixes and such like.

As you can see in the before-and-after shots here, that little ‘Star’ is now back, letting you skip straight to all those TV and radio shows you plan to catch up on at some point.

The favourites section is a welcome addition, and works exactly as it did before. 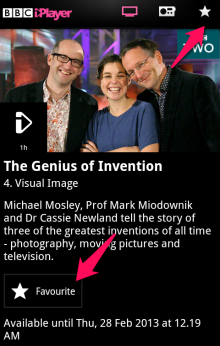 When you’re on a programme page, simply hit the ‘Favourite’ button and it will be added to your watchlist.

All iPlayer really needs now is ‘accounts’ to let users sync all their favourites across platforms, though don’t hold your breath for that.

Actually, another big feature the Android app could do with is downloads, which you may remember was introduced for the iOS incarnation back in September.

Well, in the latest release notes for the Android app it says that it is coming, though no indication as of when. It says:

“I know what you’re thinking – ‘Where are downloads?’ Rest assured this feature remains a priority and we are working hard to determine when this can be included for Android users.”

The updated Android app is available to download for free now.