Yesterday I had a interesting conversation with Alex, our talented designer at The Next Web, about the Apple Watch. We talked about how it supposedly isn’t waterproof, and if there would’ve been a market for the Nike Fuelband or not. We also wondered if future versions might contain a camera or not. 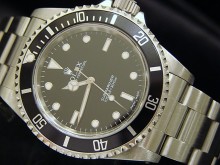 When I asked him if he was considering getting one, he said “Well yeah, maybe the next version when they make it thinner. This one is too thick for me”.

Then we looked at his Rolex up close and I suggested the Apple Watch might only be two or three millimeters thicker. Alex wears a Rolex Submariner 14060M so we looked up the specifics of and it comes in at 11 millimeters. That’s thicker than a Swatch, which starts at 8 millimeters, but there are also Swatch watches that go up to 10.5 millimeters, so it isn’t huge either.

It reminded me of the discussions we had around the iPhone and iPad launch. When those products were announced a lot of people based their opinions on the information they received from the keynote. That’s all we had to go on until we held one in our hands, and it felt lighter, cooler and seemed more functional than we had anticipated. Before then, we dismissed it as just a toy, not something we had a use for, ‘just a big iPod Touch’ and just not something we could ever see becoming popular.

And then we collectively bought 200 million of them.

The Apple Watch will probably go through a similar process. Based on what we’ve seen we think it is too small, too thick, too limited or that it has too many features. Then you hold one in your hand and you’ll realize you just need to have one.

Next up: The iPhone 6 Plus really isn’t THAT big