Tempo AI has some good news for those interested in checking out its smart calendar app. On Friday, the company announced that it was doing away with its reservation waitlist. Now anyone can instantly gain access to what people have been talking about for the past few months. Additionally, its iOS app has been updated to now allow multiple emails and other fixes.

Removal of the unpopular waitlist has been something the company promised would happen since it brought its app to Canadian users earlier this month. Company CEO Raj Singh told us that his goal was to “bring the Tempo experience to as many users as fast as we can.” To do that, Tempo began doubling the rate in which people were being accepted into using the app. Now, after just a couple of weeks, it appears all those waiting have been approved. 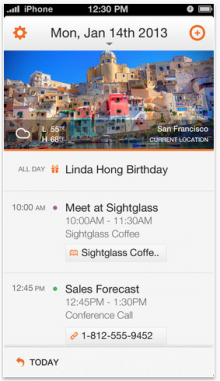 Developed out of SRI International, the Tempo Smart Calendar app is a service that will replace the iCal app on iOS devices. It will not only take your meetings and appointments, but add in any relevant information it curates from attached services.

The app will show you information about where you’re going, pulled from Foursquare data, extract the documents pertinent to that meeting, and give you the option of letting attendees know if you’re going to be late.

One of the key sources of information to help the app “learn” about your appointments is your email. Tempo supports accounts from Gmail, Yahoo, or Exchange.

Until today, users were able to add up to two email accounts. Now, the app is giving the option to add one more, bringing the total to three. That might not seem like much, but the more data Tempo has to review, the better it can provide relevant emails and documents to you for your meetings.

The company does say that it is working on adding support for additional email providers soon.

Other fixes that come with the latest version of Tempo Smart Calendar:

Tempo AI has also shared several new features that could be included in the app in the future. One such item includes the ability to invite attendees — right now this must be done from an outside service like Google Calendar. Being able to accept or decline events will also be added, along with enhancements to Tempo’s artificial intelligence and assistive “smarts”.

Launched in February 2013, Tempo Smart Calendar is taking on the likes of Calendo, Sunrise and Fantastical. But in the first month of existence, it has also processed more than 50 million calendar events through its artificial intelligence engine. With the removal of the waitlist, it will be interesting to see how many more events it has dealt with in the next month or so.