This article was published on December 7, 2013

It’s been almost a year since TechBritain unveiled its interactive map of the UK tech startup world, letting users explore local tech scenes and clusters around the country.

Doug Ward and Shaun Gibson had set out on a mission to highlight not just the companies doing cool stuff in London, but across the country, initially identifying thirteen startup communities to profile, from Edinburgh through to Belfast, and onto Cardiff and Bristol. The 13-week TechBritain tour kicked off in May 2012, and saw them interview everyone from professors and founders, to meet-up organizers and programmers.

Later that year, they embarked on a second tour, visiting Cambridge, Dundee, Brighton, Sheffield, Leeds and Liverpool, to help ensure no startup stone was left unturned. TechBritain launched in the new year.

Now, a new version of the interactive Web app is being rolled out, as the creators attempt to “better connect” the tech ecosystem across the UK. Part of this has involved looking at the data-sources that feed into TechBritain, and it’s looking to bolster it from a number of new sources in the months that follow – for now it’s tapping Crunchbase as well as manually-submitted entries through the website. 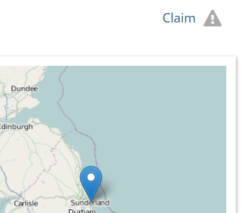 As with any data, however, it’s only useful if it’s up-to-date and correct. And this is why TechBritain is making it easier for people to add and update listings on the site. For example, if one of the already-added companies is yours, you can ‘claim it’ as such by hitting the ‘Claim’ button at the top-right of the listing. You will need to create an account to do this though.

There’s also a new reporting system for users to alert the TechBritain team as to when data about a company is wrong.

This all feeds in to the broader vision of making the data completely open by making it available to use and re-purpose among the tech community. This isn’t yet in place, but it will be happening in the near future.

Also, they’ve added a new experimental section that aggregates local startup news – it’ still in its early stages, but you basically create an account and set your city to receive a stream of news around the places that matter to you.

In terms of the site on the whole, as before, you can carry out a manual search – this could be a company name, a city .

So, typing a city name, for example, will surface companies and clusters associated with it.

You can drill down on data relating to a cluster, and see at a glance how many companies, startups, co-working spaces, accelerators, hangouts and more are part of that scene.

More broadly, you can simply access the map which displays an overview of companies by region, and the closer you zoom in, the more detailed the split becomes – so by town, city or neighborhood. It’s a fairly comprehensive tool for knowing what startup’s where and what it’s doing.

The all-new TechBritain portal will be receiving a handful of other significant updates shortly, and will be bringing more granular data to the platform too. Meanwhile, check out the new TechBritain for yourself.

Disclosure: TNW Editor in Chief, Martin Bryant, is a co-founder of TechHub Manchester with Doug Ward and Shaun Gibson, but is not involved with TechBritain.