STEM., the ever-prevalent acronym is increasingly becoming the topic of much discussion, particularly since the education of our nation’s youth has not kept up with changing technological times. In the tech world we learn to continuously pivot alongside our product in order in order to avoid feature creep. Unfortunately, in the education world the concept of “pivoting” doesn’t exist. Instead, they are subjected to a complex process which is governed by costly red-tape measures.

Public-Private partnerships are taking on a new meaning as large corporations are investing their technological resources into organizations that will enable them to teach their youth core science, technology, engineering, and math principles.

The launch of Tech Warehouse this April showcases the innovative use of leveraging corporate resources for the public good. Tech Warehouse, an online product donation marketplace, stemmed from a partnership between JP Morgan Chase and Good360 this past April. Under the new partnership, Chase plans to replace the hard drives of more than 3,000 of its computers and via the Tech Warehouse platform, connect with Good360’s network of over 27,000 qualified charities to make these computers available to those in need.

But it’s not just big companies. Startups are also at the forefront of this technological education movement. 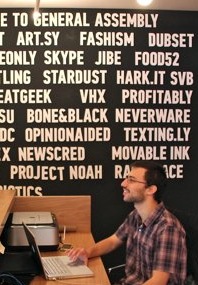 General Assembly – What happens when you combine 20,000 feet of real estate, four forward-thinking founders, with the most brilliant entrepreneurial minds this city has to offer? Pure and utter (for lack of a better word) disruption. General Assembly is at the epicenter of business, technology, and design. The team saw the importance of partnering with corporations of all sizes early on and sought to “recreate the feeling of a college campus, ” said Adam Pritzker, one of the creators of the space. “Something that was outside the structure of an institution but had the same academic tendencies.” GA offers daily community-led classes ranging from “What is a Brand” to “Immigration Law for Startups” that all cater towards their three main principles of business, technology, and design.

Neverware – A startup based out of the aforementioned General Assembly, is on a mission to reduce the waste surrounding computer consumption in schools by allowing schools to utilize the computers they already have by hooking up a server appliance that when added to a network, will power up to one hundred old desktops with Windows. According to a past interview conducted with TNW, founder Jonathan Hefter said that  “For a school in Africa, give them a LAN, one juicebox, and the computers that corporations throw out, and they suddenly now have the latest technology. Think about the implications in terms of education!”

The Technovation Challenge – Backed by hard-hitting technology players such as Google and inspired by Startup Weekend, Technovation is an extracurricular program of Iridescent Learning, a 501c3 non-profit which provides STEM education for underserved and underrepresented youth. Aimed at female underrepresented minority students, the goal of this 10-week challenge is to let the students learn what it’s like to work and learn in a high-tech environment while honing on their entrepreneurial and technical skills. Google opened up its New York offices and online Marketplace for the students to display their mobile phone app prototypes.

Education is being affected by technology in real-time. It’s about having the financial and logistical support to leverage this technology and put it back into the system that will churn out the next generation of brilliant minds and ideas. There is simply no one group that is better suited toward helping further our technology in education goals than businesses.