These new reaction faces are a type of text called ‘kaomoji’ which were originally only popular used by Japanese emoji creators to make faces out of the characters they had available to them. There are thousands of kaomoji out there and many are hugely complex (and sometimes hard to understand).

Kaomoji has now gained massive popularity basically everywhere, so we’ve gathered up the best ways to quickly use them for the perfect reaction online.

There are thousands of these things and lots of ways to find them, but my personal favorite source is Text Faces which makes it easy to copy and paste them by simply clicking, along with actively adding new faces.

¯\_(ツ)_/¯ – Sup son
The quintessential kaomoji for when you have no idea what’s going on, you don’t care or are just trolling someone. There’s entire articles about the origin of this guy, but it likely gained popularity thanks to the Starcraft community. Certain people at TNW really hate this one.

ʕ•ᴥ•ʔ
For when you just can’t bear it.

ಠ_ಠ – The look of disappointment
This one feels like it’s as old as time itself, but first appeared on 4Chan in about 2011 according to Know Your Meme. Great for situations where you’re not impressed with something and there’s no other way to express it.

(☞ﾟヮﾟ)☞
There’s so many ways to describe this one, but it’s basically finger guns.

┬─┬ノ(ಠ_ಠノ) – Respect tables
A reaction to the table flip reaction, this is pretty much the best way to troll someone who just flipped a table. There’s even a bot on Reddit that asks people to respect tables when they flip them.

For Twitter, these are important. Below you can see the Twitter humblebrag ‘got dat’ in action. There’s a whole range of these and you should cherish them all.

How to become a reaction pro

The easiest way to become adept at reacting to people with kaomoji is to set up a text shortcut that automatically replaces a word or phrase with the kaomoji that you want. It’s stupidly easy to do this:

Head into System Preferences on your Mac, then click keyboard.

Hit ‘Text’ at the top, then hit the tiny plus on the lower left to add a new shortcut.

Grab the kaomoji you want — like ¯\_(ツ)_/¯ — on your clipboard, think of the phrase you want to use to get it with and enter that on the left (I use ‘shrug’ to pull up mine) and paste the kaomoji on the right. Click off the field and you’re done! Now rinse and repeat this for all the kaomoji you want; it also works for those multi-line reactions mentioned earlier. 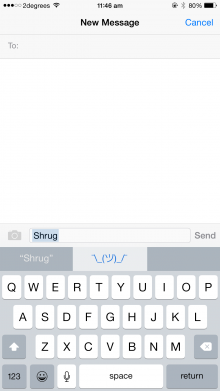 The reason I love this technique is it actually syncs these across to your iOS devices, so you can type ‘shrug’ on your phone and you’ll get ¯\_(ツ)_/¯ there too.

There are, however, drawbacks. One problem is that while they work in Safari, they won’t work quickly in Chrome as it uses its own dictionary library.

My workaround for this is I quickly type ‘shrug’ into a text editor and copy it out, but you can get more advanced apps that can do this for you, if you’re willing to pay.

Windows doesn’t have a built-in text replacement tool, but it doesn’t mean you can’t do it. The best free tool I’ve come across is called Phrase Express which functions in a very similar way to OS X’s text shortcuts.

Once you’ve got Phrase Express installed, open it up and click “new phrase.”

Give the phrase a name, then drop the kaomoji into the “phrase content” field and type what you want to use to trigger the replacement in the “autotext” box. Hit OK and you’re done!

That was easy, right? Let us know in the comments how your newfound pro-skills at reacting are going!

Read next: How to create GIFs of live events in seconds